In many countries, the number of stray dogs is a huge problem. Nobody knows how to resolve it, and the campaigns don't come to fruition because they don't have the necessary means. 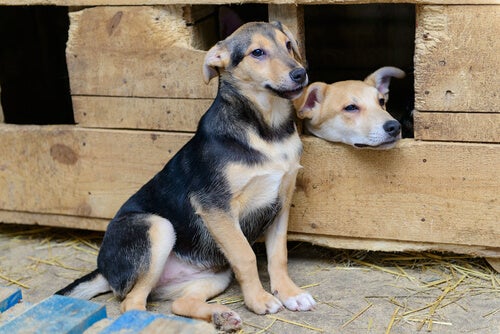 Therefore some private organizations are taking charge of providing shelter and food to dogs that don’t have owners. In this article, we are going to tell you about an initiative dedicated to the construction of houses for stray dogs. Its motto is: “if you can’t offer them a home, at least build them one.”

The city of Coquimbo is filled with dogs that wander about the streets. They fight for garbage, and they hurt each other when there is a female dog in heat. This is not something that goes unnoticed by the residents, however there are few that actually do something about it.

A group of young people gets together two times a week (Tuesday and Saturday) to create houses made of cardboard and recyclable materials that provide shelter and refuge to homeless dogs. Amor & Rescate Peluditos Callejeros (Love & Rescue Stray Dogs) is the name of this organization. A 15-year-old girl that started feeding dogs in the Main Square founded the group, and she later attracted followers to her initiative.

They organize getting cardboard boxes from the neighborhood markets and stores. Then they fix them up so that the dogs have a place to sleep, especially when it’s cold. Even if cardboard isn’t a water-resistant material, the idea is that at least the animals can count on having a warm place to spend the night.

Proyecto ambulatorio (Outpatient Project) is one of many that strive to give a better life to stray dogs. With the permission of the neighbors on the block, the volunteers put a house up for a dog that “lives” in the neighborhood. In addition, they are in charge of vaccinating and sterilizing them.

But their actions don’t finish there. They do a follow-up of the animal, they feed him, and they look for a permanent home for him. Since they don’t have help from the government or any organizations, they ask citizens to get involved by donating materials instead of money.

“If I can’t give them my home, I’ll build them a roof,” is the group’s slogan. They construct the houses with wood so that they’re more resistant. Inside, they place blankets, mattresses or other materials, and outside they leave dishes with food and water.

The second example that is worth mentioning is of a group of women from the city of Paraná, also in Argentina. They install wooden houses called “supportive kennels” so that stray dogs can protect themselves from the cold or rain.

The initiative began placing houses in parks and neighborhoods. Now, there are many volunteers that want to do continue doing so. Of course they don’t receive any money from anyone, and they work with the materials that people bring. Slowly the city is being filled with “kennels,” and the dogs have a place to sleep at night.

These initiatives are only a temporary solution to the problem of the amount of dogs on the streets. But at least they try to make the day-to-day life of a stray dog more enjoyable.

In addition, by taking responsibility for sterilization in many cases, they prevent the situation from getting worse. Even if we can’t take responsibility for every abandoned dog, at least we can take on one or two. We will be completely changing their lives. And we don’t even need to take them to our house! We can help them by building a shelter with the materials that we have available. Otherwise, they will end up in the garbage anyway. So it’s worth it, right?