How Many Animal Species Are There On the Planet?

There are over seven million animal species on the planet and most of them are insects. Even so, natural diversity isn't about taxonomic limits. 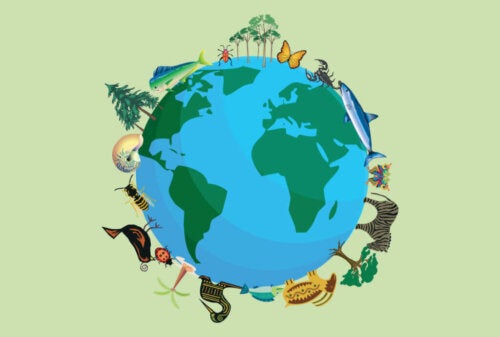 The planet has great biodiversity; estimates indicate there are about 8.7 million species, 7.7 million of which are animal species.

There’s still a lot to discover and we only know a small fraction of the estimated animal species, the rest are yet to be cataloged. Unfortunately, some of them will eventually disappear before we know more about them.

How do you calculate the number of animal species?

Taxonomy is the science of classifying species (animal or non-animal) on the planet, it even includes extinct ones. This classification is based on the kinship between organisms and their evolutionary history.

In the 18th century, Linnaeus began a system for classifying animals and plants. In fact, he grouped them into categories from the largest (kingdom) to the smallest (species). This classification has been used to identify and group animal species. In addition, genetic advances contribute a lot to it.

It’s harder to add new discoveries as we move up in the taxonomic category. Actually, it’s more common to find new species or subspecies than new classes or families.

In total, scientists think that, of the estimated 7.77 million animal species, more than 950,000 have already been cataloged. At the rate we’re making new discoveries, it would take about 1000 years to identify the approximately 8.7 million species on the planet.

The importance of biodiversity

Answering the question of how many species there are on the planet is a challenge. It shows there’s still much to learn about this world we live on; the importance lies not only in the number but also in the variety.

Biodiversity refers to the variability of living organisms on Earth and the ecological complexes they’re part of. For example, it includes diversity among species and the environment they inhabit. There are three levels of biodiversity and we must understand them in order to preserve species:

The biodiversity present on Earth is the result of 4 billion years of evolution. In fact, its maintenance is fundamental to the conservation of animal species. Unfortunately, the pace of resource consumption and the invasion of ecosystems by humans have damaged this ancestral biological balance.

Insects are the most abundant animal species on the planet

Insects are the most diverse group of animals on the planet and the most widespread. There are over a million identified species and these represent about 90% of animal species. However, we don’t fully know the actual numbers. Still, estimates indicate there are several million more than those documented so far.

What’s the secret of their success, though? Thanks to the process of evolution these animals have many advantageous morphological and physiological characteristics such as:

Finally, the taxonomic classification has been around for about 250 years. Also, there are over 1.2 million species in a central database. However, we’re yet to discover and learn about 86% of the species on Earth and 91% of the species in the ocean.

Unfortunately, at this rate, many species will extinguish before we even know about them. This is because we continue to destroy their natural habitats. Therefore, the current trends show no indication of it stopping any time soon.

What Are the Deadliest Animals in the World?
The world is as fascinating as it is dangerous. This is because some species fall within the category of deadliest animals in the world. Read more »
Link copied!
Interesting Articles
Invertebrates
The Cricket: Is It a Pest or Good Luck?