The Amazing Truth About the Squid's Genetic Code

A new scientific study has revealed that squid neurons have the ability to edit the molecules which transmit their genetic code outside of the cell nucleus. 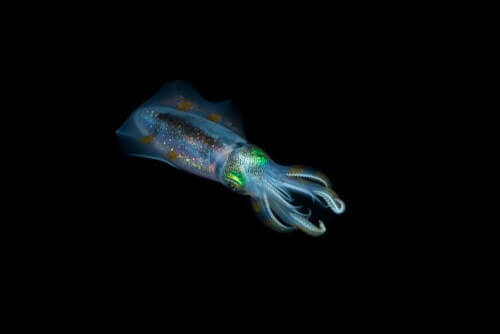 Cephalopods belong to the Mollusca phylum and there are some 700 species, including the octopus, squid, cuttlefish, and nautilus. They’re extraordinary animals with some amazing abilities, such as their camouflage skills. Some can shoot out jets of ink to disorientate their predators. Today, we’ll look at the squid’s ability to change its genetic code. It’s truly amazing!

In addition, some can glow in the deepest depths of the ocean, and others, like the octopus, can twist and contort themselves into all manner of unlikely shapes.

How can they do all these things?

The answer is neural control. For example, they change their color using pigment cells located in their mantle. These pigments expand or condense in response to muscular contraction controlled by the nervous system.

Their ability to escape from danger rapidly is the result of a sort of jet propulsion system. They have a system of giant motor nerve fibers that control the powerful contractions of the mantle muscles. This allows them to shoot out a pressurized jet of water through the hyponome.

As a result, it’s no wonder than neurologists around the world have been studying cephalopods for a long time. Their research has even revealed that octopuses have such incredible muscle control that they can hide in spaces 10 times smaller than their bodies.

In squids, scientists have discovered their ability to edit their own genetic code, not just within the nucleus of their neurons but also in the axons. Axons are long, thin fibers that transmit signals to other neurons. This study involved a longfin inshore squid (Doryteuthis pealeii) and constitutes the first evidence that genetic information can change outside the nucleus of an animal cell.

Why is the squid’s ability to change its genetic code so important?

Firstly, this is important because it furthers our understanding of neuronal plasticity. This is the nervous system’s ability to change its structure and function. This in turn, allows an animal to respond quickly to a changing environment, which is vital for survival.

Squids are masters at editing their genetic code. In 2015, the same group of researchers reported that squids edit messenger RNA (mRNA) several times better than humans.

Messenger RNA is a vitally important molecule in the functioning of living beings. It transfers the genetic code of the cell’s nuclear DNA to the ribosomes, where proteins are made. This mRNA is a translation of certain fragments of DNA that is “interpreted” by the ribosomes so that they can rebuild proteins in accordance with the animal’s genetic code.

The ability to edit the mRNA “locally” means that, in theory, these neurons could adjust the type of proteins produced to meet the cell’s specific needs. This is also an important discovery since it could help in the future to treat axon dysfunction, which is linked to many neurological disorders in humans.

RNA editing is a biological process that allows for greater versatility in the expression of the same protein. For survival, editing mRNA is much safer than editing DNA (mutations), since these can potentially be harmful. Changes to RNA can be rectified, changes to DNA are permanent.

There are many processes in the animal world that we still don’t understand. But, by looking at these processes and studying them, we hope that we can find solutions for human medical conditions. So, as you can see, this type of research is essential, not just for our own levels of knowledge but also our quality of life.

What Are the Differences Between Squid and Cuttlefish?
While these two animals are often confused, there are many differences between squid and cuttlefish. We'll take a look at some! Read more »
Link copied!
Interesting Articles
Invertebrates
Waggle Dance: The Dance of the Bees