Fish are remarkable creatures, they have been around for more than 450 million years. Over thousands of centuries, they have adapted to survive in a marine environment: This is the case for tropical fish. 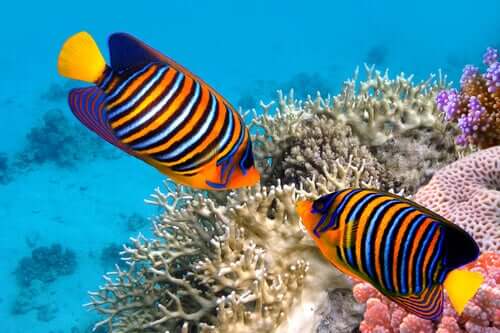 Tropical fish with vibrant colors and patterns are one of the prominent features of the reef ecosystem. Interestingly, these creatures have well-developed vision and can recognize different colors and color patterns.

Scientific knowledge in this area continues to increase. This allows for some advantages in nature.

1. Color is used to communicate and attract attention

Colors and patterns play an important role in communication for tropical fish. A reef is a high-density environment. Therefore, there’s a wide variety of color patterns so that fish can recognize and identify each other.

The males and females of some species have different color patterns. This is so that each fish recognizes their partner. This distinction is extremely important especially in reproduction, for example.

2. Tropical fish can camouflage themselves

Using patterns as a resource is thought to have been selected as an evolutionary advantage. Patterns allow them to camouflage and mask themselves, which has changed the relationship between predators and prey.

Therefore, on a reef you’ll see unusual color patterns such as horizontal and vertical stripes, lines that cover the eye, color patterns that mimic the environment, and much more.

3. Color used as a warning

Warning colors are characteristic of toxic or poisonous fish. Among them are the reddish-brown striped lionfish (Pterois antennata), the boxfish (Ostracion cubicus) with black dots, and many other fish.

Various patterns in harmless tropical fish are known to have evolved to simulate warning patterns. By adopting these patterns the fish disguise themselves and deceive their potential predators. This is known as masquerading.

These fish commonly live in a harem where there is a dominant female, but one male cares for them. If the male dies, the dominant female will assume the role of an aggressive male.

In a matter of hours, she’ll show a change in behavior and begin courting other females. She will gradually develop the characteristics of the dominant male, the sex change takes about 10 days to complete.

Fish that can change sex generally change color too. For example, the three tail, or parrot anthias fish is orange as a female, and purple as a male.

Appearance isn’t the only change. The whole body changes, including reproductive organs. It will produce sperm instead of eggs.

5. Tropical fish don’t see colors as we do

To understand why fish are colorful you need to know how their eyes work. To fully understand this, it’s important to know that color is an appreciation of the human brain.

In simple terms, when light hits an object it absorbs part of its electromagnetic wave and reflects the rest. This then reaches the human eye. The human eye captures the reflected waves and these are what we call color.

However, the human eye doesn’t see all the waves that make up light. The range of “visible” light ranges from red to violet. There are waves above red and below violet.

The electromagnetic waves that the human eye can’t see comprise of infrared and ultraviolet. The spectrum is larger and includes a range of different wavelengths.

Fish, among other living things, can see light spectra that humans can’t. Consequently, fish have a completely different image of the world around us.

Approximately half of all fish can see ultraviolet light (UV). Additionally, between 20% and 30% of fish see UV light as a different color.

For example, the damselfish – from the pomacentrid family – see the visible spectrum and can also detect UV light. Since this fish feeds on plankton, it reflects a lot of light in the UV spectrum. This ability is a substantial advantage for them.

The variety of visual capacity depends on the habitat of the fish and the depth gradient where it lives. It’s known that large predators tend to be colorblind.

Experts argue that before you know why fish are brightly colored, you need to find out what color they are to their neighbors.

7 Different Fish that Live in Warm Water
Caring for fish that live in warm water is very different than caring for coldwater fish. Today we'll tell you about several different species. Read more »
Link copied!
Interesting Articles
Fish
The 5 Most Beautiful Fish in the Animal World