The Stonefish, a Master of Camouflage

The stonefish is considered the most poisonous and deadly fish in the world, and it's a camouflage artist. They tend to bite unsuspecting swimmers who enter their habitat. 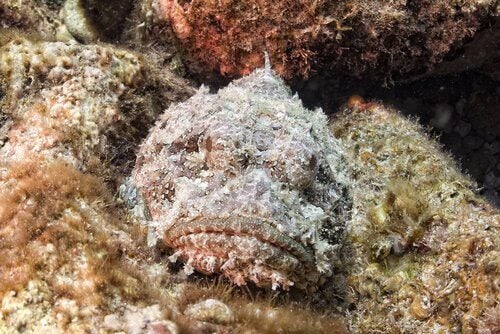 Although it may look like one, it’s not a stone. It’s a living creature that takes the form of a rock and that can hurt any unsuspecting person. The stonefish is a deadly, poisonous species that camouflages itself using grayish or brownish rocks.

When people swim in open waters, they tend to confuse this fish with a rock. Stepping on it is extremely dangerous. It will release its spines, which contain a potent poison.

The toxin will cause pain and paralysis so unbearable that, if not treated in a timely manner, can even kill the individual. However, it isn’t an aggressive fish, and won’t attack unless provoked. Its defense mechanism is only activated if someone accidentally steps on it.

Physical appearance of the stonefish

As its name implies, the stonefish looks like a crusty rock or a piece of rubble at the bottom of the sea. However, if you look closely, you’ll see some of its interesting features.

Most stonefish are brown or gray, with yellow, orange or red spots on their body. The estuarine stonefish is usually brown or reddish brown. The orange growths that look like sponges on some of these animals make them look like a piece of debris from a coral reef.

Generally, these fish can grow up to 35 centimeters in length. However, there are records of some that were 50 centimeters. It can also weigh about 2.5 kilos.

They have huge insect-like eyes. The eyes of the estuarine stonefish eyes are higher and are separated by a ridge. On the other hand, the reef species’ eyes have a deep indentation that separates them.

One of its most noteworthy characteristics is its modified dorsal fin that’s shaped like a needle. Its poisonous glands that are sensitive to pressure are at the base of this fin. It also has 13 sharp spines on its dorsal fin and, whenever it feels threatened, it will raise them to defend itself.

The stonefish lives in the coastal regions of the Indian and Pacific oceans, as well as in the waters north of Australia. Coral reefs are its main habitat. However, they can also live near and under rocky ledges, or in the mud and sand where the tide comes in.

Although stonefish are largely marine, some of them can also live in rivers. Both reef and estuarine stonefish exhibit the same pattern of reproduction. The female carries her unfertilized eggs inside her, then releases them at the bottom of the sea or on a rock.

When the male fish reaches this area, it sprays its sperm on the eggs. Once he fertilizes the eggs, they will hatch in three days. Newborns tend to be easy prey for other fish, so only a few of them will survive and reach adulthood.

Stonefish feed mainly on small fish and shrimp. It is a patient hunter and will wait for hours for its prey to come within reach, before attacking them by surprise.

Sometimes, it will bury itself in the sand in such a way that only the top of its head and its spines are showing. If its prey is behind its head, it will raise its spine to scare the prey, and then bring it into the attack zone.

On top of that, it has venomous glands at the base of these spines that contain neurotoxins. This sting can produce severe pain and swelling. Eventually, the sting will cause tissue death and paralysis, depending on the depth of penetration and the number of spines that penetrated the skin.

After releasing the poison, the glands need a few weeks to replenish. The amount of poison the fish releases depends on the amount of pressure that the victim applied to them. 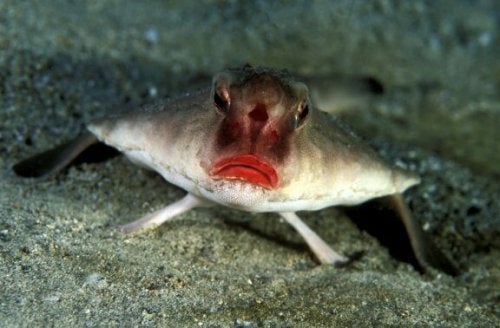 What Is the Red-Lipped Batfish?
The red-lipped batfish is an aquatic animal known for its extravagant shape and bright crimson lips, moving through the sand without swimming. Read more »