The Cirneco d'ellEtna: A small and agile hunter 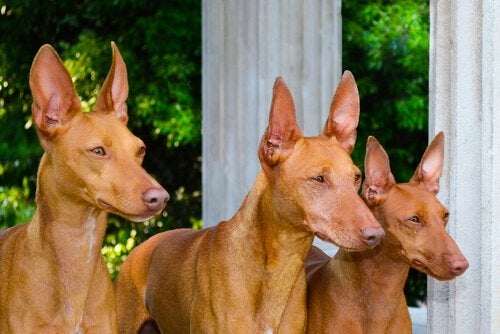 The Cirneco d’ellEtna is a small-sized dog breed. There is very little known about this species and it looks like a mutt, but behind its appearance is a dog with a lot of history and a big heart. Continue reading this article to learn more about the Cirneco d’ellEtna.

Origins of the Cirneco d’ellEtna

The Cirneco d’ellEtna is a hound from the island of Sicily. However, it’s an ancient dog breed, believed to have descended from ancient Egyptian hunting dogs. Also, most likely the Phoenicians traveled with this breed all around the Mediterranean.

There is evidence of this breed’s existence on coins, mosaics, and vessels dating several centuries before Christ. It’s believed to be one of the oldest hunting dog breeds to ever exist.

The Cirneco d’ellEtna is a medium-sized dog with a slender, elegant, and compact body. However, its muscles are strong and defined. Males measure between 45 and 50 cm in height and can weigh around 12 to 15 kilos. Females are a bit smaller, measuring between 40 and 45 cm and weighing up to 8 or 10 kilos.

They have short, thick fur, which is softer on their ears and legs. This breed comes in all shades of brown, from the lightest being beige and the darkest being brown, although it may be white on some areas of the body such as the belly, chest, head, etc.

This breed’s head is narrow and it has a long pointy snout. The “stop” or the indentation between the muzzle and the forehead isn’t very developed. Its ears are pointed and turned forward, and they are located pretty close to each other on the upper area. Its eyes are small and can be amber, ochre, or hazelnut. They can never be black, gray, or yellow.

The Cirneco d’ellEtna is a type of hound dog, which means it’s a hunting dog. Its specialty is tracking, chasing and catching small animals such as rabbits. This dog is a silent and intelligent hunter. This dog makes agile and elegant movements because it likes to jump between rocks and hillsides with ease, on mountain slopes such as Etna volcano, which is where this breed comes from.

This breed also lives happily being a companion dog. They are faithful and affectionate to their owners and even take on the role as being guard dogs.

This dog is quiet, but it has high energy levels. It’s always on the alert and can become dependent on his owner. This breed is tolerant and persistent, but independent while hunting, so it needs special training to work with its owner while hunting.

The Cirneco d’ellEtna needs little care. It has short hair, so is need baths on a regular basis and brushing every week so it will be beautiful and lustrous. During shedding season, you should brush it more often to get rid of dead hair and prevent skin problems.

This breed doesn’t have common genetic diseases. However, like any hunting dog, you should often get your Cirneco d’ellEtna checked for external parasites. Ticks transmit dangerous diseases and your dog might catch some while going out for nature walks.

They need only the regular veterinary checkups just like any other dog. You should keep its internal and external deworming and vaccinations up to date. They are usually healthy, strong dogs. When it comes to their well-being, they need long walks in the open, and especially on mountainous and rugged terrain, where they can relax and unleash their energy.

They are stubborn dogs that won’t respond well to punishment-based training or imposing orders. However, due to their intelligence, they are easy to train using positive reinforcement and pleasant experiences. The Cirneco d’ellEtna is a primitive dog breed that is all over Mediterranean lands, however Sicily is its origin. Therefore, it’s a breed with a lot of history and strength.

They are affectionate and faithful hunters who trust their sense of smell and instinct to catch their prey. Like all hounds, they are also active dogs that enjoy freedom and get very stressed out when living in the city.