The giant squid is one of the largest creatures on our planet. But despite their huge size, they can be surprisingly difficult to find... 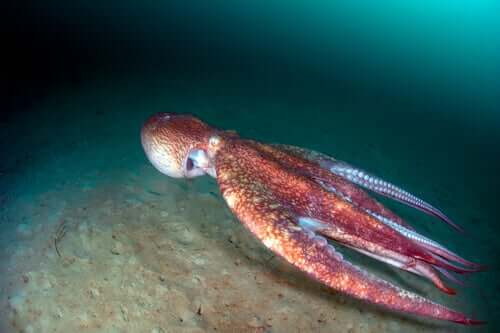 The giant squid is one of the most mysterious and curious animals on our planet. As a result, they have been the subject of many myths and legends throughout history. Today, we want to tell you a little more about them and some of their most notable characteristics.

The Architeuthis dux, better known as the giant squid, is a cephalopod of the Teuthida order. They have swum the depths of Earth’s seas for a very long time, and have been a source of terror for sailors for thousands of years.

Because these elusive creatures typically live in the deepest parts of the oceans, we still know very little about them. In fact, everything we know is the result of studies carried out on bodies that have washed up on coastlines, and the ingenuity of modern scientists.

The most notable characteristic of these curious animals is their enormous size. Males often measure over 30 ft in length, while females can measure around 45 ft. That said, squid as long as 60 – 65 ft have been recorded in the past. Their 8 arms make up most of their length, and are attached to the base of their torso.

As we mentioned earlier, everything we know about them has come from the bodies of squid devoured by sperm whales (their only known natural predator) and bodies that have washed up on beaches. A huge effort is currently being made to study these animals in both their natural habitat, and in captivity.

Despite being one of the largest animals on the planet, giant squid are relatively light in comparison to species such as the blue whale and the colossal squid. On average, males can weigh between 330 and 375 lbs, while females weigh 550 lbs +.

According to research, they mainly live on a diet of fish and shrimp, which flourish in the deepest parts of the ocean, at a depth of between 800 and 10000 ft. When food is scarce, they will resort to eating smaller species of squid, or even members of their own species.

When it comes to reproduction, we know very little about how these animals breed. Some argue that they mate by butting heads, but more recent studies have revealed that the males have a specially adapted reproductive tentacle that they insert into the female. After mating, the males leave the females and die in the open sea.

We also have no idea what these animals look like at birth, besides what we know from observing other species of squid. Some researchers argue that the females dive to the ocean floor before depositing their eggs in a mound, and leaving them to drift with the current.

The giant squid isn’t a threat to humans. To date, there have been no recorded cases of a squid attacking a human, either intentionally or accidentally. However, they can be very aggressive toward other squid and sperm whales.

Because they’re so elusive, we don’t know for sure how many giant squid there are in the world. We know that they live in all the world’s oceans, mainly sticking to deep sea trenches. There, they have better protection from predators, and a greater chance of finding food.

The giant squid in popular culture

The Echinoderms: 6 Things You Should Know
The echinoderms are a group of marine invertebrates. This group includes some of the world's most iconic marine animals, such as starfish and sea urchins. Read more »
Link copied!
Interesting Articles
Invertebrates
Waggle Dance: The Dance of the Bees