The pine processionary caterpillars can cause serious trouble for dogs if they come too close to them. 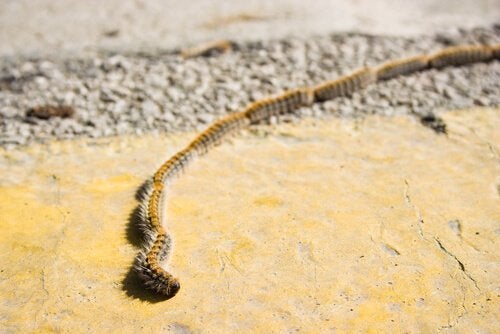 When spring comes and temperatures rise, all kinds of worms and insects start to appear. Among them is the pine processionary caterpillar. You can find this strange insect in the fields, but also in parks and gardens in urban areas.

In this article, you’ll learn about this strange kind of caterpillar that moves in straight lines. Unfortunately, the pine processionary caterpillar is a serious danger for pets.

We’ll now get to know this creature better and what to do if we discover it on our property or outside.

Some facts about the pine processionary moth

The pine processionary moth/caterpillar (Taumetopoea pitycampa) is a species of Lepidoptera that invades some areas of the Iberian Peninsula every year. It lives in the forests of central and southern Europe and is considered a plague.

The larvae of the pine processionary have black colored heads and black skin, and a gray tone on the sides. They are covered with reddish hairs called trichomes, which carry venom. This is why they’re dangerous for humans and for pets, especially dogs.

These caterpillars’ strange behavior leads them to form long lines and follow a trail. They come down from trees where the nests are, forming a line that resembles a procession. This is where the caterpillar gets its name from.

When they are still caterpillars they always move together in lines. When the time comes, they bury themselves in the ground for the final stage of their development. A few months later they come out as moths. They live mainly in Mediterranean pines, but are also present in firs and cedars, for instance.

Why is the pine processionary dangerous?

The pine processionary caterpillars are especially dangerous for pets, as they can cause allergies and hives. When they feel threatened, they release their stinging and poison-carrying hairs. Dogs are their main victims.

Each caterpillar has about 500,000 hairs filled with a toxin called thaumatopina. These hairs act as needles capable of injecting the toxin into our pet’s skin or mucous membranes.

Touching, approaching and smelling these caterpillars is enough to infect the animal. Doing this can cause irritation to the eyes, nose, or throat. In rare cases, they can cause severe allergic reactions.

Pest control specialists use physical, chemical and biological methods. One of the most common methods is to burn the nests in September, October, and November. However, pheromone traps are now widely used for male specimens. This prevents their reproduction and is a very effective method.

How to know if a dog has been poisoned

It’s fairly easy for dogs to encounter one of these caterpillars during a casual stroll. They’ll most likely attempt to approach them, especially young dogs, as they’re more curious than older dogs.

They’ll probably sniff them, lick them, try to eat them or even just touch them with their snouts. This is quite enough to provoke a reaction in the dog.

Signs that a dog has come into contact with a pine processionary caterpillar can vary. The most common are: intense itching or hives, swelling of the lips, swelling of the tongue, and excessive salivation. The dog will also become nervous and agitated. It will also try to scratch its mouth with its front legs.

The pet may get a fever, diarrhea or be sick if it swallows the caterpillar. The most important thing to do is to check the appearance of the tongue. If affected, it will usually be inflamed and purple. In addition, if a specialist doesn’t provide treatment immediately, areas of necrosis and tissue loss may occur.

The tongue damage can cause the dog to stop eating, with all the problems that this will bring. In more severe cases, facial or pharyngeal edema may occur, causing shortness of breath. Moreover, there may also be an anaphylactic reaction that can have a fatal outcome.

It’s imperative to contact a specialist if there are signs that a dog has been poisoned by a pine processionary caterpillar. And, as always, the best form of cure is prevention. It’s preferable to avoid walking with the dogs in areas where there could be pine trees during the months of February, March, and April, as this will minimize the risk of exposure.