An Iranian Solider Lost a Leg to Save a Dog 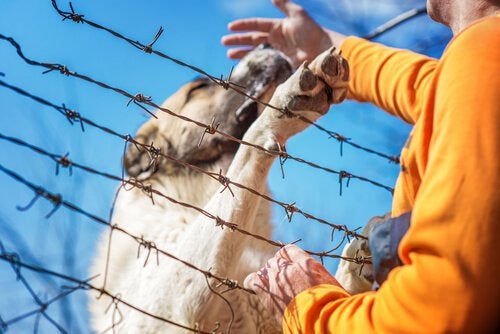 Mohammad says that he loves animals. And his words became action when he saved the life of a dog trapped in a barbed wire fence next to a minefield. His actions cost him the loss of his leg, but he does not regret doing this to save a dog.

The history of a soldier who loves animals

“I’d do it again”, Mohammad, whose last name is Bakhtar, says. This 19-year-old lives in Iran, a country rocked by conflict. It is also a place where differing human interpretations of Islam lead to the poor treatment of dogs.

But Mohammad’s heroic act to save a dog caused—at least for the moment—a truce between the different political and religious positions. And perhaps it opened a small breach of hope for furry companions to be more accepted.

Mohammad was doing military service at the time of the accident. And he only had one year left.

Bakthar was on guard duty one cold night when he suddenly heard plaintive cries. He quickly realized that a small dog was caught in the barbed wire of a fence next to a minefield.

Without hesitation, the young man went to help the animal. But, to be able to release the animal, he had to rest his leg on part of the mine.

The dog ran away as soon as it was free. But, Mohammad’s fate was already sealed. A few seconds later, there was a big explosion that destroyed one of his lower limbs.

The story of Bakhtar went viral and alerted the media

The soldier was urgently transferred to the hospital in the town of Tabriz, located in the northeast part of the country. But the doctors couldn’t do anything to save his leg and it had to be amputated.

Soon his story went viral on social networks, especially Twitter and Telegram. Then it was in the newspapers and on television.

Because of this, the hospital where he was staying was invaded by journalists, government officials, and ordinary people. Everyone wanted to thank Mohammad for his heroic attitude.

For a moment, it didn’t seem to matter that Bakhtar is Sunni. This is a religious minority in Iran where Shiites are the predominant group.

An action that made everyone forget their religious and political differences

Many people were concerned about the future of the young man. And they demanded some type of assistance to ensure his wellbeing.

Even the Iranian vice president Masoumeh Ebtekar congratulated Mohammad. And he called him “a source of honor and pride for every Iranian”. He also offered him a job in the Environmental Protection Organization (EPO) under his care.

The young man called the proposal a “childhood dream.” I hope it comes true! And I hope he can contribute to dogs having a greater acceptance in a society ruled primarily by Islamic laws.

When he returned to Marivan, the city where he lives, in the region of Kurdistan, the young man was greeted by a multitude. Many people brought appreciation banners and flowers to greet him.

Bakhtar says that when he was a child and lived in a small town, he had a dog. And he always loved nature.  But then he had to transfer to the city to attend high school and to work. So, he didn’t have the chance to get a pet companion.

Maybe life, that gives you something but also takes something away, will now give him the chance to be happy in a good job surrounded by the animals he loves so much.