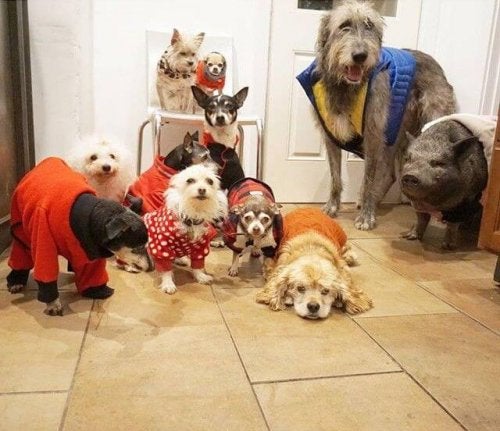 Steve Greig had a big plan. He wanted to adopt dogs that other people had rejected because they considered them too old.

Adoption, a custom on the rise

There is no doubt that adopting is a commitment that you should think about when getting an animal. Adoption is necessary to stop the exploitation of animals, or at least to help prevent it.

Many people don’t want to adopt an animal with certain conditions.  Many times cats or dogs with disabilities are rejected.  Sometimes older animals are overlooked because people assume that you can’t train them or that they won’t feel the same affection for an older animal that they would for a kitten or puppy.

The story of Steve Greig

Steve’s story begins years after the unexpected death of his dog.  Steve wanted to honor the life of his late friend. He did this by adopting the “oldest and least adoptable” dog from a local shelter.

So Greig came home with a 12-year-old, little Chihuahua named Eeyore. He had problems in his knees and a heart murmur.

When asked at the time, Steve said that at the moment he realized that his would change the rest of his life.  Most people, after the death of a beloved pet, feel the loss so strongly that they try to prevent it from happening again.

But the best thing, according to Greig, is that one pet can replace another.

Caring for 10 dogs, pigs and other smaller animals is not an easy task. Greig’s daily activity starts at 5 in the morning. At 5 a.m., he wakes up to prepare breakfast for the entire crew.

It is not easy to feed all his animals. Among other things because several of his pets have different diets, so he has to prepare ten different types of food.  In addition, he has to give them various medications.

Besides food, his days also include walks, playtime and several medical treatments for sick animals. Keep in mind that the daily care a pet receives in youth often determines health in old age.

Games are important to keep dogs in shape, as well as taking care of their physical and mental health.

The daily care that a dog receives as a puppy and youth will significantly affect his health in old age. Due to this, daily walks are key to the welfare of the animal and are part of a routine that must be maintained as they get older.

Experts recommend a minimum of thirty minutes of physical activity per day for an older dog. Long walks are an excellent way to get this time in.

Keep in mind that moderate exercise for an older dog can help in the prevention of different degenerative diseases. This is the case with arthritis, which affects the animal’s joints.

Physical activity will also reduce the risk of the animal being overweight throughout its old age.

The quality of food a dog has had in its life also plays an important role with it comes to caring for the health of an older adopted pet.

You should consider that the care for older animals truly begins at birth. Nutrition and preventive health measures that are put in place while the dog is a puppy will influence their life expectancy in later years.

The dog’s diet has to change throughout its life.  One reason is because the body of an older dog works a slower rate than that of a young dog.  Their food should contain fewer calories since they have reduced physical activity.

Food bags and cans of food have specific recommendations for older animals.  They suggest lower calorie food that is rich in fiber.

Food for older dogs is often rich in protein as well, in order to counteract the loss of muscle mass that afflicts older dogs.