The Asian Hornet arrived in Europe in 2004 and reached Spain across the Pyrenees in 2010. There are currently efforts to exterminate this invasive species to protect native wildlife. 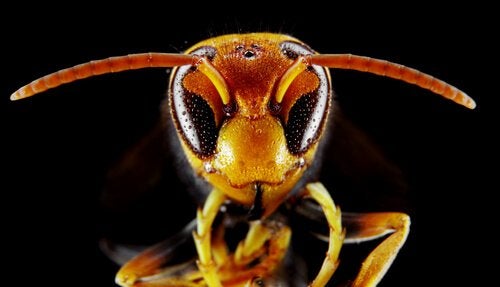 The Asian Hornet (Vespa velutina) is, as its name suggests, a species of hornet that’s found in southeast Asia. However, they’re mainly known for being one of the most dangerous exotic invasive species.

Like other hornets, the Asian hornet mainly eats other insects. In particular, one of their favorites is bees. This makes them particularly dangerous for ecosystems where bees weren’t previously prey.

Asian hornets are three times the size of normal hornets. Like other similar insects, they have a queen and workers. The Asian Hornet’s nest is built in trees, but can also be built in people’s homes, where they can be a risk to people.

The nests are spherical and tend to have an opening on the side, where up to 2,000 hornets can enter and leave the nest. Inside the nests are the larvae, who are the true consumers. Bees make up some 84% of their diet.

The adult Asian Hornet eats ripe fruit and nectar from flowers, which makes them damaging to crops. Their predators include the Shrike, the Honey Buzzard, and a family of birds known as Bee-eaters.

How do the bees defend themselves against the Asian Hornet?

Since European bees have never lived alongside the Asian Hornet, Asian Bees have had to coevolve and find ways to defend themselves in order to be able to survive for thousands of years.

What these bees do is surround the Asian hornets in large numbers in a swarm. This causes an increase in temperature and a reduction in the oxygen levels which kills the hornet. The bees, on the other hand, can tolerate these higher temperatures.

This type of behavior is currently being observed in European bees, however, it’s happening no that often. This doesn’t mean that the Asian Hornet doesn’t pose a serious threat to bee populations in Spain and other European countries. Given that bees are mankind’s main pollinator, the disappearance of bees would be catastrophic for human beings.

Is the Asian Hornet dangerous for people?

Although you shouldn’t panic, it’s true that the Asian hornet does pose certain risks to people. However, the risk isn’t much greater than the European hornet, because they both prefer to flee rather than attacking.

In general, both species attack to defend the nest. This means the greatest risk is when working in trees or accidentally stepping on a nest on the ground. However, the venom is just like the European hornet, except the Asian Hornet delivers more when they sting.

The danger exists for those people who are allergic to the venom or to multiple stings. It can even be deadly for some people. In fact, a number of people have died as a result of Asian hornet stings.

Why is the Asian Hornet in Europe?

Asian Hornets arrived in Europe in 2004 aboard a cargo ship in France. In 2010, it was confirmed that they had spread across the Pyrenees into Spain. From there they spread to the Basque Country, Galicia, Asturias, Cantabria, Catalonia, and even Mallorca.

This species has been classified as an invasive species in Spain, and, as a result, the government is slowly carrying out an extermination program. Even still, for now, the Asian Hornet appears to be resisting. We hope that the native wildlife manages as well.