The aye-aye is a peculiar species endemic to the island of Madagascar. As of today, it's considered an endagered species. Learn more in this article! 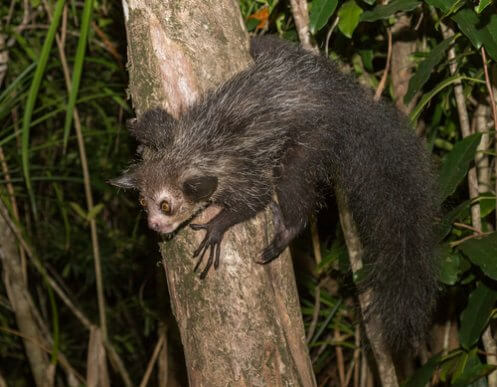 The aye-aye is a unique mammal, native to the island of Madagascar. As of today, it’s an endangered species. Unfortunately, this is the reason why this animal has gained visibility worldwide. Coming up next, we’ll talk about its main features, habitat, diet and mating habits.

The Aye-aye (Daubentonia madagascariensis) is a primate that is related to lemurs. It’s a rare animal, and to this day is the only living species of its genus (Daubentonia). The other animal closest to the aye-aye became extinct about 1,000 years ago, and was known as the giant Aye-aye.

It looked so peculiar that, when it had just been discovered by scientists, it was labeled as a ‘strange squirrel’. However, the physical features along with its wet nose indicate that it’s a rather primitive primate species.

The Aye-ayes are medium-sized, reaching a body length similar to that of an adult cat. Their body measures almost 16 inches, and the tail can reach 6 inches long.

Their body weight is quite light compared to their size, and hardly exceeds 6 pounds. This allows them to move very quickly and easily flee from their natural predators.

Among their most striking physical features are the broad ears, which are round at the tips. In addition, they also have large and somewhat bulging yellow eyes. The latter is a typical feature of nocturnal animals, which enables better vision in the absence of natural light.

Their legs are short and look rather strange, with long, thin fingers. They also have sharp pointy claws on their fingers.

Interestingly, the Aye-aye has a longer and thinner third finger on his hand that it uses for digging and catching insects. It’s also known that this third finger is very sensitive to vibrations. In addition, its temperature rises while the Aye-aye searches for food.

Diet and habits of the aye-aye

Aye-ayes are arboreal animals (they live most of their lives up in the trees). They have an omnivorous diet, based mainly on insects or larvae. However, they also tend to eat some fruits and seeds to meet their dietary needs.

As we briefly mentioned, this long, thin third finger plays a key role. The Aye-aye uses it to hit the bark of trees, something similar to what the woodpecker does with his beak. Aye-ayes are the only mammal to have developed this skill.

When it manages to make a small hole in the trunk, the Aye-aye inserts its finger inside to search for insects, larvae or worms. In addition, this finger’s sensitivity to vibrations allows the Aye-aye to know the exact location of its prey inside the tree.

Along with this technique, the Aye-aye also uses its powerful sense of hearing to find small holes underneath the tree’s bark. Hollow sounds indicate that larvae and insects have eaten the wood inside the tree and are within reach.

As mentioned in the introduction, the Aye-aye is a native species of the island of Madagascar on the African continent. Currently, about 2,500 specimens live throughout the African island, with slightly more on the eastern side.

In its natural habitat, these animals can reproduce all year round – it doesn’t have a specific mating season. One sign that females are receptive is when they agree to be in the company of males 24 hours a day.

Although some of them may be quite sociable, this day and night sharing between females and males only occurs during reproduction. Males, on the other hand, are aggressive towards each other, and they can engage in deadly fights.

For every gestation period, the females give birth to a single baby. They will take care of it until it’s able to survive on its own. Generally, females only agree to mate again two or three years after their last pregnancy.

The aye-aye’s lifespan can be between 20 and 23 years in optimal conditions. Nevertheless, we need to take into account its main predators, including the human being. All in all, it’s considered one of the most endangered species of lemur, with its habitat being destroyed for urban development.

The Impressive Wildlife of Madagascar
Madagascar is considered one of the most biodiverse countries in the world. Learn all about some of their species in this article! Read more »
Link copied!
Interesting Articles
Cats
How to Feed a Newborn Cat