Mistakes When Raising A Cat

It might seem to be a simple task, but cats are nothing like dogs because they are much more detached. Even though they inherit behavioral traits from their mothers, this doesn't mean that they're good to go once a breeder sells them to you. 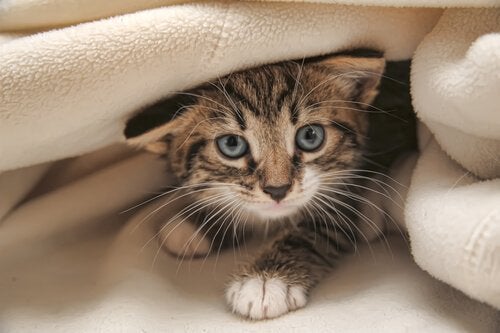 Raising a cat is not a simple task. In fact, it requires a lot of time and effort if you’re going to live together in harmony and teach them basic commands. People often make several mistakes when raising a cat and you should not do them yourself.

Obviously, regardless of whether you decide to get a cat, dog, or any other animal, you would most likely want your pet to be happy and well-behaved. In this article, you can read about some helpful tips for raising a cat.

Mistakes when raising a cat

Did you know that humans are the only animals that drink milk after they’ve been weaned? In actuality, humans don’t do this out of necessity but because we like it and our body can handle it.

However, this isn’t true for cats. They only need a mother’s milk for the first two months of life until they’re weaned. If they ingest it later, their stomachs and digestive systems will have a rough time digesting or processing it. As you can see, cat drinking milk is a myth.

People often think that cats and dogs are similar in many ways, but there are obviously a lot of differences between them. Their personalities and behaviors are quite different and therefore they need to be treated differently.

For example, dogs are more dependent and cats are much more independent. Cats don’t need to feel integrated into a group, whereas dogs do because they are pack animals. Dogs also learn commands easily and are faithful to their owners.

Shouting at your cat

Cats are pretty easygoing animals, even to the point of ignoring their owners’ commands, which might make them a little irritated. Sometimes it annoys their owners so much that they could even end up shouting at or scolding your cat. However, this will only frighten them.

In contrast with dogs, cats are very proud and a little ornery. Your cat won’t easily forget that you’ve treated them bad or come running to your arms as if nothing had happened.

Believing that you can’t train your cat

It’s true that from birth a cat learns basic things from their mother and siblings. However, this doesn’t mean that you can simply let them be without teaching them some commands.

Many people believe that a cat cannot learn like a dog to come when called, give their paw, sit still, etc. It’s true that both species are different, and that dogs learn much quicker, but cats are highly trainable. In fact, it’s important to train them if you want to live in harmony with them and help their development.

Adopting a cat too early

This is one of the most common mistakes about getting a cat – taking them away from their mother too early. This happens especially often with pedigree cats because most breeders only care about making some quick cash.

If you adopt a kitten too early in life, it would only have them miss out of important teaching they would receive by being with their mother. When it comes to dogs, this first stage is called ‘“imprinting” and although it’s not called this with cats, the effect is still the same. During this period, the kittens learn to relate with their siblings and mother and this will outline which behaviors are acceptable.

It’s a socialization process that helps them become well-behaved, social, affectionate, and happy.

Feeding them too much

Many pets seem to have a bottomless stomach and are always looking for something else to eat. However, it’s good to point out that cats can easily become obese and don’t get as much exercise as dogs.

Being overweight could cause serious health problems like diabetes, kidney stones, joint pain, and skin problems. Make sure that your cat has a balanced diet that includes all the nutrients they need that’s not too high in fats or carbohydrates.

Remember, adopting a pet implies a lot of responsibility. So, be careful not to make these mistakes when raising a cat!