People who rescue wild animals should reduce contact with them as much as possible and thus avoid attachment. In this way, the animals have a better chance to reintegrate into nature. 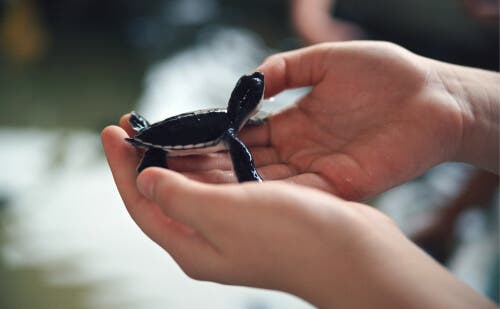 A rescued animal imprinting is an attachment that occurs as a consequence of saving a very young wild specimen.

Want to learn more? Let’s take a closer look at this interesting topic below.

Newborn birds or mammals are the groups of animals where an imprint can occur. When these animals are rescued and no further action is taken, they will take their caregiver as their “mother” the moment they begin to grow and have more autonomy.

Nevertheless, the rescue of fauna (both wild and urban) is fundamental to the conservation of the species at the same time.

Not only is the specimen saved, but important data about the species is obtained. For example:

However, attachment isn’t a problem in the case of rescued animals that can’t return to nature and must stay in a wildlife conservation center. As a result, the development of a link between the caregiver and those non-recoverable animals facilitates the permanence and management of the individual in the center.

If the animal has the chance of returning to nature, the caregiver should provide a series of actions oriented to meet their needs, without causing an imprint. As a result, this prevents the animal’s chances of survival in their natural habitat from being drastically reduced.

How do rescued animals arrive at the centers?

Thousands of species arrive at wild animal recovery centers or assessment and rehabilitation centers every year. These can belong to any animal group, from arthropods, such as spiders, to mammals, such as bears.

The reasons why an animal may end up in such a center are varied:

As we can see, an animal can end up in a recovery center for many different reasons.

In most cases, animals have been abused by illegal trafficking of species. However, these usually come from other countries, making it virtually impossible to return them to their place of origin. In addition, they rarely survive after a trip where they traveled in poor conditions.

Usually, animals belonging to invasive exotic species that haven’t reached a center will systematically receive euthanasia. This is the procedure that follows because that’s what the legislation requires. On the other hand, these animals pose a serious danger to native fauna and flora.

However, animals that arrive after being seized (i.e. intercepted by law enforcement officers at customs) usually remain in rescue centers for years until the trial is done. Normally, this involves euthanasia for the animals.

On the other hand, when species that belong to the native fauna arrive at the centers, a different protocol comes into place:

In many cases, animals that reach the rescue centers are usually very young. Thus, these need to be fed from a bottle (if they’re mammals) or special porridge depending on the species (if they’re birds).

In these situations, it’s best to keep the animals together with individuals of the same species and age whenever possible. On the other hand, caregivers should start giving them solid food as soon as possible.

The animal’s accommodation must also be adequate. Therefore, when they’re old enough, the caregiver must switch them to special cages (for birds) or larger enclosures (in the case of mammals).

Similarly, the animals must learn to find their food, especially carnivorous species. Therefore, the latter will have to perfect their hunting strategy at the center.

If this isn’t done properly or in a similar way to the one mentioned above, rescued animals may not be released for several reasons.

In sum, rescuing animals is a noble (and brave) act. However, it’s important that we have in mind how much we can jeopardize the animal’s survival if we don’t consider important factors such as rescued animal imprinting.

Discover What an Animal Sanctuary Is and How to Help
An animal sanctuary is a permanent shelter for animals that have been rescued from abusive situations. Learn about them and how to help in this article. Read more »
Link copied!
Interesting Articles
Wild Animals
Australian Fauna: Discover the Country's Endemic Animals