Feeding, reproduction, or even simple habits of certain specimens can damage the ecosystem if they are introduced into new habitats. Some mammals, fish, mollusks, and insects, for example, can harm the environment and other indigenous beings. 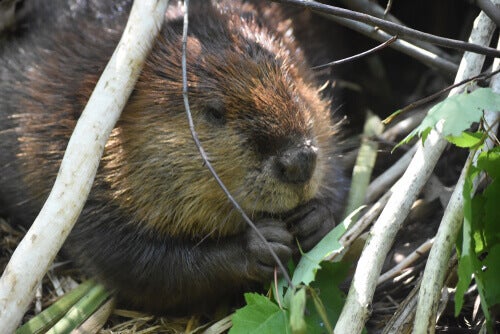 When a species enters a new habitat, it’s usually humans who bring them in. However, the habits of these new animals can severely affect the ecosystem. Species with harmful habits negatively impact their environment, as well as other animals that live there. In this article, we’ll tell you about some of these animals.

What are animal species with harmful habits?

The International Union for Conservation of Nature (IUCN) is an organization responsible for documenting and analyzing the effect of these exotic species – both animals and plants – that damage the environment.

Although we could say that humans are the most harmful of all species with harmful habits, the truth is that we aren’t alone on that list. There are many other species that, due to their diet or manner of reproducing, have a negative impact on their new home. Some of these animals are:

This mollusk originates from Tropical Africa, such as Kenya, Somalia, and Tanzania. However, they currently live in South American countries, such as Venezuela, Colombia, and Peru. This is due to the fact that they adapt well to all hot and humid climates.

The African giant snail feeds on leaves and plants in large quantities. As a result, experts consider this to be a harmful animal. Moreover, this animal easily becomes a pest. Their secretions cause infections in mammals that come into contact with them.

Humans use these domesticated mammals for meat and milk. They live in high mountains in areas with lots of slope and elevation. They feed on any plants they find.

However, goat farming is harmful to the environment because these animals can destroy trees and plants by uprooting them. To avoid this, they should only live on stony terrain. On the other hand, they do need some vegetation to eat.

Experts know these ants for their ability to modify any environment, whether urban or agricultural. Scientists consider this to be one of the animals with the most harmful habits because their colonies are made up of millions of specimens. As a result, they can occupy large areas of territory.

Experts consider this invading insect a pest because they don’t rest any time of day or night from their search for food. Their diet is made up of almost any decomposing plant or animal.

This rodent is from South America. They live in wetlands and have destructive habits for the environment. They build their burrows with logs, branches, and leaves. However, these burrows can change the course of rivers. This can even result in drought in certain areas since their homes act as natural dams.

The beaver, a closer relative of the otter, is also considered harmful in places where humans have introduced them, such as Tierra del Fuego (Argentina) and Valle del Ebro (Spain). They form dams with branches on rivers and waterways. They also destroy trees with their large teeth.

This animal’s habitat is the northern coast of Australia and several islands in Oceania. However, they were accidentally brought to Guam on a cargo ship. There, this animal took advantage of the lack of natural predators, such as the wild boars. As a result, they were able to reproduce without problems.

The proliferation of this snake in the area has lead to the devastation of most native birds. They have also caused the reduction of the population of other animals such as lizards and bats. These snakes have an extensive diet, which also includes small rodents and shrews.

The red deer is divided into 27 subspecies, distributed in the northern hemisphere. However, they are mainly in the United States, Canada, and Scandinavia.

However, experts consider this to be a harmful species in places where humans introduced them for hunting, such as Chile, Argentina, Australia, and New Zealand. There, they compete with other native herbivores for food.

This fish, which can live in fresh or salt water has been introduced almost everywhere in the world. This is another species with harmful habits that are worth noting.

These animals live for a long time, around eight years. They also are large, reaching around four feet. In addition, they have excessive diets, and can greatly reduce populations of small fish and zooplankton in rivers and oceans.

The Unwelcome Invasive Bullfrog
This articles tells you about the invasive bullfrog and how dangerous it is to almost any ecosystem in the world due in part to its durability. Read more »