The Characteristics, Behavior, and Habitat of the Otter

Inhabiting almost every continent on the globe, the otter is a docile, territorial, and extremely intelligent aquatic mammal. 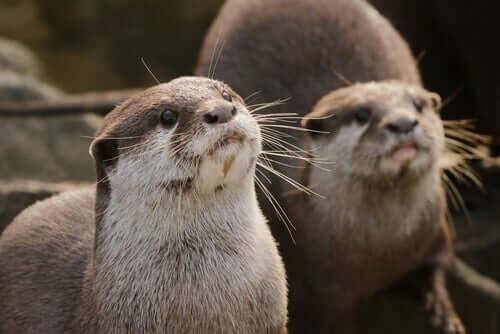 Today we want to tell you all about one of the most amazing and enthralling mammals species around: the otter. Otters are aquatic mammals that not only live in rivers, but in the ocean as well. They’re believed to be the most intelligent species on the planet, as they can even build their own tools.

The characteristics of the otter

Otters are a species that belongs to the mustelids, meaning they’re related to ferrets, badgers, and minks. Despite what many people believe, otters are not related to beavers. Beavers belong to the rodent family, and therefore have nothing to do with otters.

Therefore, otters are aquatic mammals with a large hydrodynamic and slightly flat body. They can measure from 24 to 34 inches long, approximately. This is without taking into account their tails, which can measure almost half the length of their bodies. Their legs are short and they have a membrane between their toes that helps them swim and dive.

Despite popular belief, otters don’t feed on berries and plants. For the most part, they eat fish, and, for that reason, we can call them carnivores. However, some otter species eat frogs. And there are also species that live in tropical regions and dig around the bottom of rivers to find shrimp and crabs.

The habitat of the otter

Otters live in almost every part of the globe, with the exception of Australia and Antarctica. And they tend to inhabit the shores of rivers and lakes, but there are some sea otter species, which usually prefer warm freshwater.

Thanks to their impermeable fur and their multiple layers of fat, otters can withstand cold waters. They live in areas where water is fairly shallow. This is because, though they are aquatic, they spend many hours each day stretched out under the sun.

Normally, they build their nests in swampy areas, marshlands, and forests that are along the water. This allows them to hide very well and escape from predators. Just the same, it’s important to point out that otters don’t have many predators. Their biggest threat is humans who hunt them for their skin.

Despite being aquatic animals, they build their dens on land. Some dig into the dirt in order to make their burrows, while others build nests in the branches of rocky shores.

Except during the reproductive season, otters don’t live in burrows or in any permanent home. Rather, they define a territory that they live in and defend it, and they move about this territory freely.

We can find otter specimens in very diverse regions like Asia, Africa, tropical waters, etc. In North America, there’s also a type of sea otter that feeds on mollusks. Interestingly, there’s a type of giant otter than lives in South America. And while they appear in many different countries, the majority of them live on the shores of the Amazon River in Brazil.

There are 13 different otter species, although we can also take into account another species, the Maxwell’s otter, which is now extinct. Below, we’ll tell you about the most well-known.

The behavior of the otter

Otters are docile animals that don’t tend to attack without prior warning. They are territorial and may fight with members of their own species. However, they usually get along just fine with other animal species.

They spend many hours of the day outside of the water on the shore, soaking up the sun. The time when they are most active is at night, as they take advantage of the daytime to stay in hiding.

Otters have the ability to use tools in order to find their food. In fact, humans have spotted otters using rocks to smash shells that they are unable to open with their own claws. There are very few animals that know how to use tools, a characteristic that is a sign of great intelligence.

Despite being a very docile animal that’s not afraid of humans, it’s best to observe them from a distance and not interfere with their habitats. Not all of the otter species are in danger of extinction, but they all fight for their survival. They may become stressed and are essential to the ecosystems where they live.

Finally, The Fur Trade Is Coming To An End
In the fur trade, many animals suffer when their fur is torn off while still alive. In Denmark, more than 17 million mink skins are produced annually.  Read more »
Link copied!
Interesting Articles
Mammals
Characteristics and Eating Habits of Javan Rhinoceros