The American mink is one of the biggest invasive exotic species in almost all corners of the world. 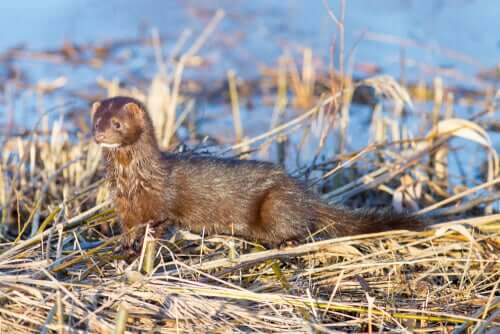 The American mink is originally from the North American continent. But, due to reasons such as its great expansive and colonizing potential, these days it has extended its habitat to much of Europe, Asia, South America, and New Zealand. Learn more about it below.

The brief evolutionary history of the American mink

This carnivorous mammal was first described in 1777 by the German naturalist Johann Von Schreber. The American mink is part of the mustelids family. This group of mammals is characterized by its carnivorous diet, its elongated body, and its wide range of distribution. There are several known species within the mustelids, such as the ferret, the weasel, and the otter.

Biologists have currently identified two species of minks: the European mink (Mustela lutreola) and the American mink (Neovison vison). Despite being related to some degree, recent studies on the American specimen reveal that it’s a much more specialized animal. This means that, in general, the American mink is more adapted for hunting and predation, and the shape of its skull and body indicate this.

If we talk about size, it can be said that the American mink is a medium-sized mustelid. Its length ranges between 12 and 18 inches, and its weight between 1 and 3 and a half pounds. These variations – especially the weight – depend on the time of year and sex, but males do tend to be larger.

The mink’s legs are short but sturdy. This, together with the elongated shape of their body, gives them an advantage when sneaking into their prey’s burrows. Their body ends in a bushy and relatively long tail. The head is small, although in comparison to that of the European specimen it’s more prominent. The eyes and ears are also small, but this doesn’t prevent them from having excellent sight and hearing.

Their fur is dense and lustrous, with a color that varies depending on the time of year. In winter, dark and brown colors usually predominate. In summer, the fur shortens and its colors are more muted.

The lower lip and the chin of the American mink are a very characteristic white color. These coloring patterns are useful for distinguishing them from their European relatives since they usually have an additional white spot on the upper lip.

Habitat and distribution of the American mink

Like many other mustelids, these animals prefer habitats near freshwater. Therefore, it’s common to see them in rivers, streams or lakes. However, the mink feels safest when these bodies of water are protected on the banks, either by vegetation or by rocks. It’s in those areas where they can shelter themselves and dig their burrows.

Initially, the mink lived throughout North America and Canada. But, due mostly to interest from the fur industry, it began to artificially enter South America, Europe, and Asia. This has meant that some specimens have established wild populations all over the world.

Its rapid expansion has triggered alarms in several countries. The American mink is beginning to displace some native species of mustelids, particularly the European mink. Campaigns to reduce its population, in most cases, are not paying off.

This has led to control measures to be hardened in fur farms. In addition to that, many governments have taken measures such as an eradication plan, or the inclusion of this species in the Catalogues of Invasive Exotic Species in many countries.

Finally, The Fur Trade Is Coming To An End
In the fur trade, many animals suffer when their fur is torn off while still alive. In Denmark, more than 17 million mink skins are produced annually.  Read more »
Link copied!
Interesting Articles
Birds
Lesser Kestrel, the Smallest of the Falcons