The giant otter is a fascinating animal. Even though it's quite sociable among its congeners, it's quite vicious when it comes to defending itself against predators. Unfortunately, this animal is currently in danger of extinction due to its illegal hunting and reduction of its habitat due to human activity. 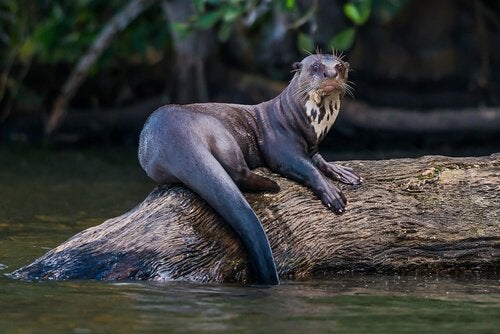 The giant otter is a species of mammal that belongs to the order Carnivora, of the family Mustelidae, which inhabits the Amazon. Furthermore, its scientific name is Pteronura brasiliensis and it’s the only species in this genus. Also, there are two known subspecies: P. b. Brasiliensis and P. b. Paraguensis.

The giant otter is also known as water jaguar, river wolf, and water dog. Other names are: in Brazil, ariraí or ariranha; in Uruguay, wolf tie; in Argentina, wolf, choker or Ariray; and in Paraguay, Lobope. The name of the genus Pteronura comes from the ancient Greek word ‘pteron’ (feather or wing) and ‘ura’ (tail) and refers to the characteristic shape of its tail, which resembles a wing.

Mainly, the giant otter inhabits freshwater rivers and streams that are seasonally flooded. Also, other aquatic habitats include freshwater springs and permanent lakes. For this reason, two factors play a role in their habitat selection:

They build their dens in areas adjacent to the rivers where they are protected throughout most of their daily routine. Also, otters clear certain areas in order to build their settlements. Furthermore, the extent of these areas can reach a maximum of 90 feet long by 50 feet wide. Moreover, they mark them by means of odoriferous glands, urine, and feces. 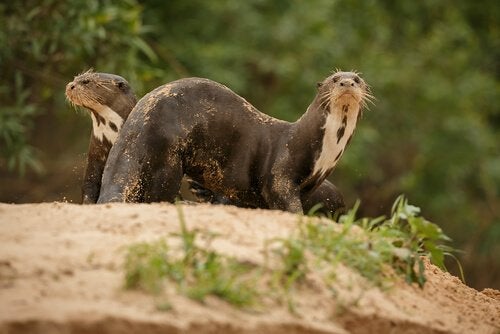 In terms of otters, the giant one has the shortest coat and its range of colors go from light to dark brown, depending on the part of their body. However, some may also present reddish or dark blond.

In addition, their hair is quite dense. An evolutionary trait to ensure that only the outer layer of hair gets wet. Similarly, this outer layer is approximately 1/3 of an inch thick, roughly twice the width of the inner layer.

Furthermore, giant otters have a spot on the neck which ranges from off-white to white. Curiously, the shape of said spot is unique to each individual.

In the same way, the snout of the giant otter is quite short and it provides the oval shape to their face. Likewise, their ears are small and rounded and they have very sensitive whiskers.

These allow them to detect any changes in water pressure and currents, and make it easier for the animal to locate prey. Similarly, their legs are thick and have large webbed feet with sharp claws.

Additionally, the interdigital membranes on their legs are for swimming, maneuvering and propelling themselves in the water. Furthermore, if they want to swim faster, they use their strong tail to do so. As you can see, these creatures are very well adapted to aquatic life. So much so, that they can hold their breath for up to eight minutes while underwater.

Giant otters are only active during the day. Their vision is particularly acute and they not only use it to hunt their prey, but also to detect and avoid potential predators.

This feature is distinctive of the giant otter since the other otter species have a normal or slightly myopic vision, both on land and in water. As for their hearing, it’s also quite acute and their sense of smell highly developed.

The giant otter is a highly social animal that lives in large family groups. These groups often have three to eight members and there may be up to 20 individuals in total. Otter families have a strong link because they sleep, play, travel and eat together.

However, there are common acts of aggression between members of the species, although their defense against intruders seems to be cooperative. Adult males usually deal with aggression, although alpha females sometimes form surveillance groups.

Otters are a bit opportunistic as they have a great adaptive capacity to consume the most abundant species of their environment. In regard to food availability, they also feed on crabs and snakes.

Otters hunt alone, in pairs, and in groups, while relying on their keen vision to locate prey.

Otters have a great capacity for maneuvering under water. So, they can either attack prey from above or from below, holding it with their jaws. After capturing it, they consume it immediately beginning with the head, which they hold firmly between their front legs. They consume around 10% of their body weight per day (about 7 pounds).

The females seem to give birth to their offspring during the dry season. Their estrous cycle lasts 21 days and they’re sexually active between the third and tenth day of the cycle. Furthermore, they form couples and mate for life.

The gestation periods range between 65 and 70 days and they give birth to 1-5 pups although the average is two. Reported intervals between births range from 21 to 33 months.

Moreover, females give birth in burrows previously built and guarded by their family group. They’re generally located near the banks of the rivers and their favorite fishing places.

At birth, the young have a lot of hair that protects them and they’re born blind. The males take part in all breeding matters of the offspring, so their family ties are strong. Likewise, older siblings also participate in less active parenting.

Generally, the pups open their eyes around the fourth week after being born. They begin to walk by the fifth week, and they’re able to swim properly at the age of 14 weeks. They stop breastfeeding when they’re nine months old and start hunting for themselves shortly after.

In 1999, the International Union of Conservation of Nature (IUCN) cataloged the giant otter as an endangered species. However, it has been considered vulnerable since 1982.

Trade of the species and derived products is illegal internationally under the regulation of the Convention on International Trade in Endangered Species of Wild Fauna and Flora (CITES).

The current total population is difficult to estimate, although a study by IUCN in 2006 suggests there are about 1,000 to 5,000 otters. According to the IUCN Red List, the presence of the giant otter in Argentina and Uruguay is uncertain.

The giant otter has been a natural icon in the province of Misiones in Argentina since August 1996.

As a result of otter skin poaching, which was a lot more prevalent in the 1950s and 1960s, the population decreased considerably. Presently, the reduction of their habitat is their main threat.

The giant otter, being a fish predator, has conflicts with native fishermen who consider them competitors. Ecotourism is also a great danger to the species. 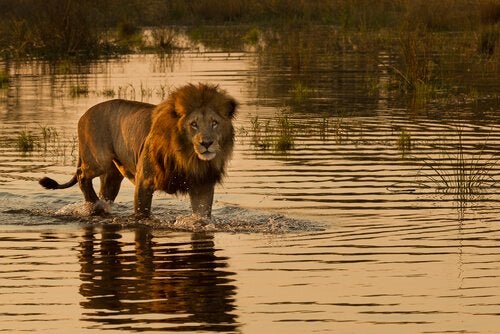 The Lions that Hunt in the Sea
In Namibia, there are lions who face extreme climate situations, so much so that they now even hunt in the sea for seals and other animals. Read more »
Interesting Articles