Tibo, A Paralyzed Dog that Began to Walk Again Thanks to the Love From His Family 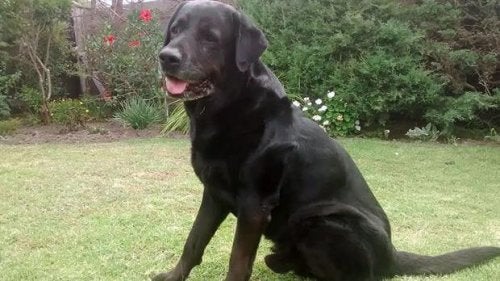 Tibo the dog woke up one day and could not move his body. However, despite this very negative diagnosis, Tibo’s family found a treatment for his paralysis and made a film of the outcome in order to motivate others who have paralyzed pets.

A special day for Tibo, the paralyzed dog

One day Leonardo, Tibo’s owner, got up and opened the windows then looked outside at the garden. Like always, Leonardo was waiting for Tibo, his huge black dog, to pet him and say good morning. However, things were different that day. Leonardo started calling Tibo, thinking that maybe Tibo got caught up with some mischief and was hiding.

As time passed, Leonardo got worried and went to the place his pet normally slept. Tibo looked at him, but he could not move. His eyes were open but he was motionless.

Leonardo said, “I was very scared. Tibo was not hurt, he had his eyes open and he wagged his tail, but the rest of his body was motionless. I would lift up one of his legs, let go and it would fall.” Leonardo picked up his pet that weighed more than 50 kilos, and took him to the town veterinarian. Over there they examined Tibo and ran some studies.

At first, it was not easy for the veterinarians to come up with a diagnosis. He could have got hit, stung, poisoned by some chemicals, or maybe had fallen down. The truth is that he had no strength whatsoever. The veterinarians said they could not do anything to help the paralyzed dog.

The family was very worried. It was not easy for Leonardo and his wife to explain to their young children what was happening. The children were very sad and scared. Leonardo said: “If I ask my children to draw their family, they draw the dog too. Seeing Tibo like that was heartbreaking for everyone. ”

More tests for the paralyzed dog

Leonardo and his family insisted on doing more lab tests. They took Tibo to the vet to a nearby town to run more tests. However, none of the veterinarians could explain his medical condition, he didn’t respond to any reflex tests, like a getting pricked with a needle or bending his legs. His legs did not react at all.

The animal did not complain, didn’t cry or feel pain, but his sensitivity to stimuli and ability to move his body didn’t react at all, he was paralyzed.

The first injections of corticosteroids and vitamins didn’t have any effect, but Leonardo didn’t give up just yet. “I searched until I found a canine physiotherapist and started treating my dog with electrodes and the doctor gave us a battery of exercises to strengthen Tibo’s muscles and taught us how to massage him in order to stimulate his body. ”

Physiotherapy had a positive effect. The work was continuous, and Tibo put in a lot of hard work and was finally beginning to respond to stimuli. The family came up with the idea of bring home a new puppy. The new dog was a playful poodle that motivated Tibo to move.

One of the great milestones for Tibo was being able to stand for a few seconds. This small advance motivated Leonardo to insist on continuing with the physiotherapy. When summer arrived, the family began to perform exercises in the water with Tibo.

The family only spent a month doing these new activities, until Tibo regained some movement is his legs. Finally, he stood up and walked for the first time in six months.

An example of tenacity

Tibo’s family is an inspiration for other people to be patient. Leonardo’s comments below:

“All the veterinarians helped us and advised us to give the dog time, even without knowing the origin of the disease. But people who face a similar situation, cannot stand to see their dog in pain and paralyzed. So, they end up putting the dog to sleep. In order to prevent putting dogs to sleep, we made a video and we posted it on YouTube. We hope other people who may be going through a similar experience would see it.”

The impact on social media was immediate. Messages from different corners of the world began to arrive, thanking Leonard and his family for being patient and for the information they provided.

Although loving a dog may seem like a simple concept, there is more to be understood than simply loving him and giving him what you want. Giving affection to a dog involves having strong positive emotions and wanting whatever is best for him. This means making the animal feel loved and safe.

Source of the image: www.lanacion.com.ar

Illnesses and Treatment
Which Are the Most Common Diseases in Beagles?

Beagles, those ancient hunters selected for their wonderful sense of smell and robustness, also have their weaknesses. In this article,…