The Different Species of Aphids and Their Characteristics

Aphids are small insects that barely measure a few millimeters once they've reached adulthood. There are more than 4700 species of aphids. 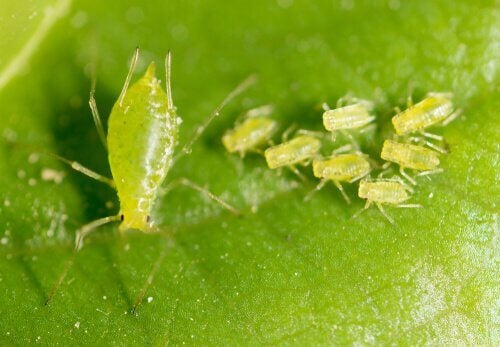 Aphids are small insects that belong to the Aphidoidea superfamily. It’s an extensive family, and we’ll be looking at many of the different species of aphids in today’s article, as well as their main physical characteristics and habits.

Currently, there are more than 4700 species of aphids. It’s the most numerous and diverse family of hemipteran insects.

An interesting characteristic of this family is that its individuals can look very different from one another. For example, there are both winged and wingless species, with different colors and patterns of coloration.

Generally, an aphid is characterized by its tiny size, since they only grow to be a few millimeters in length when they’re adults. Its body is soft and usually has an oval shape. Normally, there is no distinction between its head, abdomen, and thorax.

Depending on the species, it will have between four to six segmented antenna and three ocelli. The winged species have two pairs of transparent wings. The back wings are much larger than the front wings.

They also have two erect appendages—called cornicles or siphons—at the end of their abdomen. These small structures fulfill a defensive function. They expel repellent substances that scare away their predators.

Species of aphids and their reproduction

Aphids are viviparous insects that exhibit heterogony. That means they have different forms of reproduction. Generally, there’s an alternation between several generations of parthenogenetic females with a single amphigonic generation.

The so-called ‘virginal reproduction’—from unfertilized female sex cells—takes place in the parthenogenetic generations. This means that the offspring develop without the need for fertilization. As a result, the offspring are born as ‘clones’ of their progenitors.

This reproductive method is used by some species of insects, amphibians, reptiles, and even birds. In the case of aphids, a single female can produce 100 offspring per reproductive phase.

As for the amphigonic generations, reproduction occurs with the fertilization of the gametes that the males and females produce. The male transfers his sex cells to the female and the egg is fertilized inside her.

Experts believe that this characteristic is an adaptive capacity that aphids and some other animals have developed. By changing the way they reproduce, they can better guarantee the perpetuation of their species, even in poor environmental conditions.

Despite what you may think, aphids aren’t related to fleas. In fact, they don’t resemble them morphologically or in their habitat and lifestyle.

Fleas are ectoparasites that usually feed on their hosts’ blood. On the other hand, aphids use their suction-like mouthparts to feed on the sap of plants.

Therefore, aphids are usually around crops and plantations. However, they’re considered pests in these areas because of their great reproductive capacity and their predatory habits.

During the spring and summer, different species of aphids are usually crop producers’ greatest concerns. This is some of the damage these insects can cause on plantations:

How to naturally fight aphids

Dragonflies: All About This Large Winged Insect
Undoubtedly, dragonflies are fascinating insects that arouse human curiosity. Find out more about this large winged insect and its cultural meaning.  Read more »
Link copied!
Interesting Articles
Fish
Different Types of Water for Your Fish Tank