The Evolutionary Meaning of Being a Hermaphrodite

In the animal kingdom, a series of factors can occur that prevent reproduction between beings of the opposite sex. One of these things is hermaphroditism. Next, we'll tell you the importance of this in evolutionary framework. 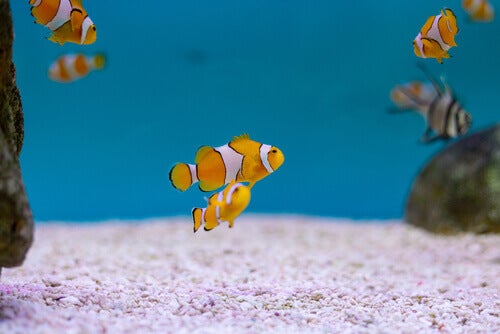 Hermaphrodite beings are those that produce male and female gametes. This situation is widespread in most plants, but did you know that hermaphroditism also occurs in animals? Here, we’ll show you why being a hermaphrodite can be an evolutionary advantage in the animal kingdom, along with some examples.

In nature, there are many different methods of reproduction. These have varied throughout history, according to the evolutionary advantages that they provide to each species, whether plants, animals, or fungi.

There are two general reproduction systems:

Advantages of being a hermaphrodite

Sex assignment theory holds that hermaphroditism is favored by natural selection when the number of offspring is greater in hermaphrodites than in populations where the sexes are separate.

According to a study in the Journal of Evolutionary Biology, for mating to occur, animals must move about in search of their mate. If an organism lives fixed to a structure without any mobility, such as corals or mussels, finding another being to reproduce with is a challenge.

On the other hand, it’s also difficult in cases where individuals actively search for a partner because this has a high cost in terms of energy. Therefore, these animals have to manage the cost of time and energy to look for both food and a partner.

Animals can find a mate while they feed, but if they focus only on finding a mate, food is put on the back burner.

There are some hermaphrodites that self-fertilize so they don’t need another being to reproduce with, but these beings are rare.

However, the rest of the hermaphrodites can mate with any individual they meet while organisms with separate sexes need another animal of the opposite sex. Therefore, hermaphroditism is an advantage in these circumstances.

On the other hand, when mating is efficient in terms of energy, hermaphroditism is not a good breeding strategy. In these cases, natural selection comes into play so that these species end up with separate sexual organs.

Hermaphroditism is also useful when population density is very low, due to the scarcity of individuals.

Hermaphrodites produce both male and female gametes. However, the circumstances in which they fertilize themselves are specific.

The amount and type of gametes will depend on what best suits the physical needs of the animal.

Therefore, depending on how they manage the number of sex cells, there are two types of hermaphroditism: simultaneous and sequential.

However, some species can alternate between the two types. This will depend on:

Animals that practice simultaneous hermaphroditism are those that, when they find a mate, can act as both a male and a female.

The ability to choose to act as one sex or another can generate conflict, as both individuals will choose the one that is easier.

In this case, the animal itself changes sex throughout their life. They begin with one type and end up with the other. This sex change has been programmed into the genes and is determined by the environment itself.

Hermaphroditism occurs in invertebrate animals and fish. These are some examples:

These creatures experience sequential hermaphroditism. Clownfish are born as males, but, eventually, they change sex and become female.

They also undergo this change when the females of the group die. This is a method of maintaining the population. All these changes are regulated by hormonal expressions.

Being a hermaphrodite: Snails

Snails are a classic example of hermaphroditism. They produce both male and female gametes. However, they don’t have the ability to self-fertilize. So, when they mate with their partner, one is the male, and the other is the female.

Although there are male and female starfish, some species are simultaneous hermaphrodites and others are sequential hermaphrodites.

It all depends on reproductive success

Hermaphroditism, or gender separation, in one species occurs depending on reproductive success. Population density, energy costs, and capacity for movement are the factors that most influence the existence of one type of reproduction system of another.

Finally, we can conclude that low population density and slow movement favor hermaphroditism. On the other hand, if there’s a population made up of a large number of individuals that can all move efficiently, the separation of the sexes is more favorable.

Concerning the last argument, many scientists affirm that the separation of the sexes results from hermaphroditism.

Hermaphrodite Animals in the Invertebrate World
Only some hermaphrodite animals can self-fertilize themselves. However, if they are joined with another specimen they can adopt the sex that is needed. Read more »
Link copied!
Interesting Articles
Amphibians
4 Species of Poisonous Toads

Animals
Discover Which Animals Use Echolation

Have you ever wondered how certain animals locate themselves in the sea or in the sky? Several scientists have asked…

Frugivorous animals are those that feed on fruits, either exclusively or partially. One-fifth of mammals belong to this group, which…