Natural Selection and Adaptation in the Animal World

Have you ever wondered why some animals have evolved in a certain way? We'll tell you all about natural selection and adaptation in this article. 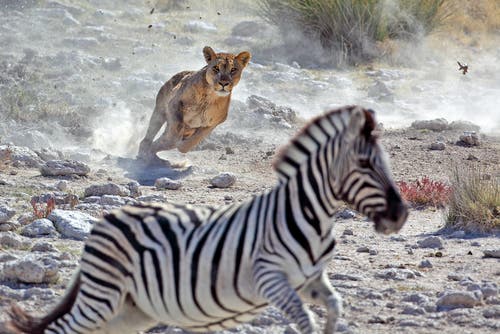 Natural selection and adaptation are natural tools that guide the evolution of all species. All beings that exist today are a result of these processes.

On the other hand, adaptation is the ability to a living being to survive and reproduce in a given environment. In this sense, adaptation, or the inability to adapt, creates natural selection.

As you can see, natural selection and adaptation are closely related. Let’s read more about this relationship below. It’s a fascinating journey through the animal world!

If all animals were perfectly adapted to all ecosystems, there would be no natural selection

The origin of the terms natural selection and adaptation

Charles Darwin was the first person to study these concepts. He wrote the book The Origin of Species. Many consider this to be the first scientific work on this subject. Additionally, it’s a fundamental text in evolutionary biology. In fact, this book actually aroused great controversy, especially among religious groups.

Experiments documented in the book challenged one of the main pillars of Christianity at the time: creationism. In fact, Darwin outright denied the idea of intelligent design. Intelligent design is the involvement of God in the evolution of species. Even though many would claim this is now a proven theory, to this day natural selection still has numerous detractors both inside and outside the scientific field.

Survival of the strongest, right?

Ever heard of a dog-eat-dog world? Many people associate this phrase with the survival of the strongest animal. However, it turns out that the concept isn’t quite like that.

Survival of the strongest animal doesn’t apply to every natural selection scenario. Let’s take a closer look at the following example.

For example, in a wolf pack, the alpha male is the only one who has the right to reproduce. This individual wolf is the one who guarantees the maintenance of their genetics. The wolf reached the highest position in the pack by fighting the rest of the males.

In this case, we can assume that this alpha male is strong, vigorous, agile, and attractive to other wolves. He’s the strongest of the pack. As a result, the offspring of this “super wolf” are going to have strong genetics.

On the other hand, the genetics of the rest of the wolves aren’t worth anything compared to the alpha male. These wolves will never have the opportunity to reproduce unless they manage to defeat an alpha male at some point.

As you can see in this scenario, survival of the strongest applies perfectly. But let’s look at another example.

Have you ever seen a male peacock? Those giant tail feathers are so impressive to us and to female peacocks. But if you think critically about these huge tail feathers that females like so much, you might see a few issues. For example, these create difficulties when escaping potential predators. So why have peacocks evolved to have a huge tail when it makes them more vulnerable and weak?

Survival of the most suitable

Natural selection and adaptation don’t always favor the strongest. Instead, they favor the most suitable – the animal that has the most descendants.

For example, sometimes selective sexual practices promote features that are detrimental to the animal’s ability to survive, such as in the case of the peacock. Even so, these seemingly weak animals manage to reproduce and maintain their genetic line.

Animals that Adapted to Extreme Cold
For some animals, low temperatures and snow are part of their normal lives. Up next, we'll tell you all about animals that adapted to extreme cold weather. Read more »
Link copied!
Interesting Articles
Tortoises and Reptiles
Chinese Water Dragon: Breeding and Care