The Origin and Evolution of Horses

The origin and evolution of horses took place in North America and then spread to Asia and Europe. 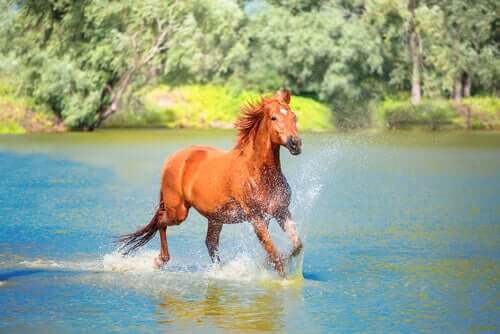 Knowing about the origin and evolution of horses is quite a historical journey and can reveal a lot about human civilization.

This is because human coexistence with horses has been, as still is, very important for the development of our cultures.

These animals helped us break down barriers and travel huge distances to connect with people in various faraway villages. In addition to that, they supplied entire civilizations with essential tools to ensure survival.

The origin and evolution of the horse reveal these animals developed skills of sociability and coexistence. So, a historic emotional bond between humans and equines began and allowed the survival of both species.

The origin and evolution of horses – etymology

These large herbivores have a long and arched neck adorned by a voluptuous mane.

You may not know it but this animal wasn’t always called “horse.” Their first Latin name was “Equus.” Then it turned into the Latin “Caballus,” which also has Celtic roots and loosely translates into “castrated horse.”

In principle, scientists believed that domestic horses belonged to a different species from their wild relatives. Thus, in 1758, Linnaeus included domestic horses in the Equus caballus species. He also classified wild horses within the species Equus ferus.

Subsequently, science showed that wild and domestic horses belonged to the same species. It also showed that their differences in appearance and character were due to different evolution processes and domestication.

So, this is how current horses now belong to the same species and receive the scientific name of Equus ferus caballus.

A brief summary of the origin and evolution of horses

The first stories about breeding and domestication of horses date back to around 3500 BC, in a region that today belongs to Kazakhstan. Archaeological investigations lead us to believe that the first ancestor of the horse lived over 50 million years ago.

This is the oldest ancestor of the horse. Actually, their skeleton seems more like a tiny dog as their bodies were between 7 and 14 inches tall. Their face was short and their eye sockets in the center of their face.

People found these fossils in Oregon and in the Eocene sediments of Wyoming. Scientists think they originated there about 55 million years ago and then expanded through North America and Eurasia.

This name translates to “intermediary horse” (or “middle horse”). It’s supposedly the transition from the primitive horse species to the horse we currently know. In these skeletons, the teeth have high crowns that allow grazing herbs, leaves, and buds, and with that, their bodies become stronger.

People found these fossils in Canada and in the states of Colorado, Nebraska, and Dakota. Also, these horses were supposedly around approximately 37 million years ago.

The origin and evolution of horses – Miohippus

The appearance of Miohippus marks the first horizontal branching in the horse’s family tree. Thus, it means the diversification of horse breeds begins.

People assume that there were many specimens of these horses in the Oligocene epoch. Above all, they populated the Florida area and the western part of the USA.

These ones retained primitive characteristics such as the three toes on the hoofs, but they underwent an important habitat change. Supposedly, they appeared over 24 million years ago.

This one is the first ancestor that resembles the modern horse. Although they still had odd-toes, their faces and legs were already longer. As you can see, these adaptations were better for traveling long distances and for perfecting grazing techniques for food purposes.

This one is the “grandfather” of the modern horse. This is because it widely branched out and gave rise to various breeds that occupied the entire continent. They were supposedly around between 6 and 12 million years ago.

These horses are the direct relatives of the genus Equus, which includes horses, zebras, and donkeys. Even though people found their fossils in North America, scientists believe they also lived in Europe, Asia, and South America. Also, they lived about 5 to 13 million years ago.

The origin and evolution of horses – Equus

You may not know it but this genus was the only one in the equine family to survive thanks to its adaptive capacity. The first specimen supposedly emerged 5 million years ago. Also, people found fossils in every continent, with the exception of Australia and Antarctica.

So, Equus was around during wars, migrations, crops, sports, travel and medical therapies over 3,500 years ago. It’s the most successful adaptation in the origin and evolution of the horse.

15 Fascinating Facts About Horses
Horses are some of the most beloved animals in the world. But how much do you know about them? Today, we'll give you 15 fascinating facts about horses. Read more »
Link copied!
Interesting Articles
Horses
Learn How to Ride Horses