The Piranha: Get to Know This Frightening Fish

This carnivorous fish lives in the freshwater rivers of South America.  Due to their voracious appetite, they have been shown in many films attacking people. 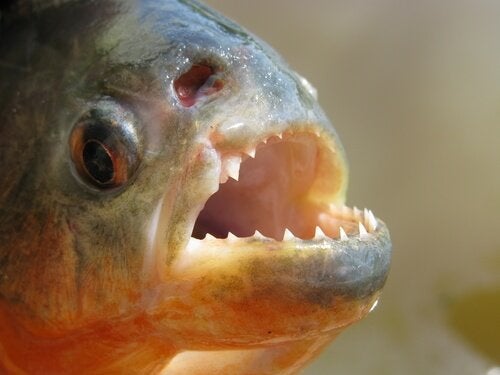 The piranha is one of the most feared fish in the world because they have large, sharp teeth, a muscular body, and an insatiable appetite. InIn this article you can learn all about this “monster” that can devour a person within minutes.

They are carnivorous and omnivorous freshwater fish that live in South American rivers like the Amazon, the Orinoco, the Plata, and the Paraguay. They can measure between 15 and 25 centimeters long. However, some specimens are more than 35 centimeters.

Their sharp teeth and outsized jaw muscles are the piranha’s main physical traits. It has an aggressive appetite for meat and can devour skin and bone within minutes.

Most of its attacks on humans have occurred in the Amazon rainforest. Likewise, the most dangerous piranha species is the red-bellied piranha, who has a sharp sense of smell and can detect blood from miles away.

Within the piranha family genus, there is the famous Pygocentrus, the Serrasalmus that have the most recognized subspecies, and the Pristobrycon. The others only have only one registered species each. Below are the most popular piranha species:

First, is the Pygocentrus cariba and it’ in the picture above. It is known as the Orinoco piranha because it lives in the Orinoco river basin in South America. This tropical freshwater fish has a matte gray body with a black spot under its operculum and a red-orange belly.

Interestingly, females are larger than males. They can measure up to 35 centimeters and weigh one kilo. The piranha’s mouth has very sharp teeth that are up 9 millimeters long. Also, its aggressive nature is similar to other fish of its kind. If it feels threatened, it instantly attacks by biting.

This fish may have bitten many people. However, it doesn’t do so to feed, but rather to defend itself.

This species’s scientific name is Pygocentrus nattereri and it prefers tropical freshwaters that are between 23 and 27°C, and with an acidic pH level. That is why it lives in the Amazon, Paraná, Paraguay, Uruguay, and Essequibo river basins in South America.

Males can measure about 33 centimeters long and weigh more than 3 kilos. They are silver with black dots on their backs, and their belly turns deep red as they grow. Their prominent jaws with pointy teeth sticking out of their mouths, and snake-like movements in the water. Therefore, these traits make them very scary looking.

These piranas eats fish, worms, and insects, and they cause the their sharp can cause serious damage to humans. Plus, they attack during times of drought or intense heat.

This piranha, whose scientific name is Pygocentrus piraya, lives in the tropical freshwaters of San Francisco River basin in Brazil. Males can measure 40 centimeters long and weigh up to 3 kilos. They have dark, slightly greenish scales, a yellow belly, and white spots on both sides of the body.

As its name suggests, the black piranha has a dark body. However, sometimes it is gray with a lighter belly than its head and fins. It’s shaped like a rhombus, with a flattened snout, very developed teeth, and intense red irises.

Finally, the Serrasalmus irritans is an endemic Venezuelan piranha. It lives in the clear waters of the Orinoco basin, mainly in flooded forests, savannas, and swamps.