The Social Structure of Monkeys

The social structure of monkeys serves to guarantee a group's survival. Actions like searching for food and warning other of the presence of predators are key in the reproduction and protection of their young. 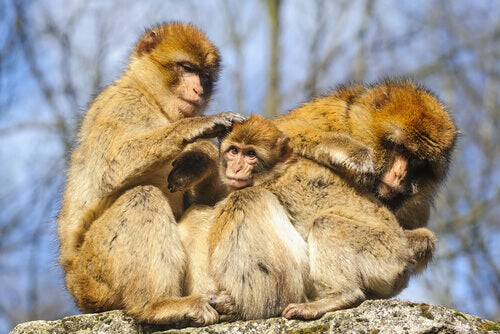 Biologists have long spoken of the similarity between the monkey family and human beings. In fact, this relationship goes far beyond physical similarities and also encompasses social behaviors. The social structure of monkeys has a great deal in common with relational behaviors in humans.

Monkeys have a habit of living in groups. And this habit gives them greater chances of survival when it comes to looking for food or defending against predators. What’s more, it benefits the reproduction and protection of their young.

Like human beings, socialization in monkeys is tied to emotions. That is to say, in regard to how we feel in our social group. In this sense, situations like stress and conflict are determining factors in the breaking off of relationships and the formation of another social group.

The social structure of monkey

The social structure of monkeys varies according to each species. However, most sustain certain similarities when it comes to their social behavior. In many cases, social groups have one dominant leader that controls the functioning of the troop.

Groups of monkeys can consist of members of the same sex or of different genders. At the same time, there can be very large groups that contain other smaller social circles. What’s more, this doesn’t affect the overall harmony of the entire troop.

Depending on the species, social groups in the wild consist of between five and one hundred members. In the case of nocturnal micos (marmosets), their social structure is small because they’re monogamous. Therefore, they form circles of between two and four members that consist of a couple and one or two offspring.

The social behavior of monkeys

The way in which the social structure of monkeys is conceived guarantees survival. So, each individual fulfills its function according to its designation. It’s interesting to note that there are some species where females must search for food while males care for the young. And, of course, the opposite is also true.

In general, monkey species have one dominant male. And, in some cases, like that of the wedge-capped capuchin (Cebus olivaceus), he is the only reproducing male. In fact, the leader even enjoys the benefit of eating more and having other members of the group groom him.

In numerous groups, it’s common for females and their young to form a social circle. Eventually, male offspring will leave this circle in order to form another family within the same social structure of monkeys.

Forms of socialization in monkeys

Monkeys are highly social mammals. In this sense, they use a variety of resources that allow them to establish bonds within their social structure and strengthen their function within the groups.

Something that’s very characteristic in monkeys is their ability to make faces or facial expressions. This characteristic is known as non-verbal communication, and is more visible in species like chimpanzees, apes, and gorillas.

Through facial expressions, primates seek to produce empathy in others in order to establish relationships. The same occurs in humans’ social behavior. That’s to say, human beings feel greater empathy toward other people whose facial expressions are similar to their own.

If we observe carefully, these kinds of gestures can transmit many different sensations and feelings. For example, they communicate fear, anger, sadness, affection, and much more.

Another form of non-verbal communication among monkeys is hugging. Especially among adults, this behavior can be recurrent in the presence of young monkeys or new members. It’s a particular way of welcoming others.

Social Structures of Elephant Herds
There are some animals, native to other countries, that we don’t know much about. Examining the social structure of elephant herds will help us learn more. Read more »
Link copied!
Interesting Articles
Animals
6 Animals that Can Suffer from Depression