Half of all primates species in the world are threatened, primarily due to hunting and the destruction of their habitats. 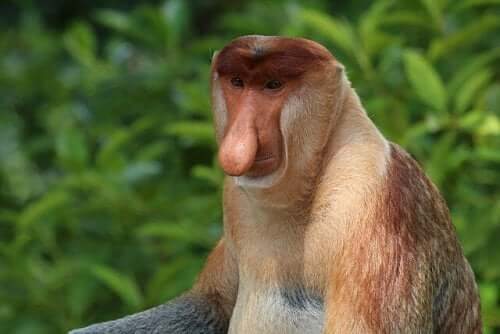 The monkey is the animal that is genetically closest to humans, since some theories state that we descend from these species. Currently, there are about 260 monkey species in the world. In the following article, we’ll be talking about the most famous ones in Europe, America, Africa and Asia.

What species of monkeys exist?

Many primates feed on fruit, as well as insects, leaves, or seeds. Most of them have diurnal habits and are really intelligent compared to other animals. In addition, like some domestic animals, they are sociable and affectionate with their families. Up next, we’d like to mention the following species of monkeys:

The baboon or “Papio”, is a genus of primates that rarely climb trees and can be medium to large-sized. All baboons have long muzzles that resemble a dog’s, and heavy, powerful jaws with sharp canine teeth. They also have hands with opposable thumbs, longer facial hair and aggressive behavior towards each other.

Its main habitat is the African savannah, but it can also live in some parts of the Middle East and Europe. In addition, its diet consists of all kinds of small animals, fruits and leaves.

Within the macaque family, the red-faced macaque is one of the most famous. It’s found in the mountains and forests of Japan and can survive temperatures as low as 5°F.

Its short tail and reddish face possess a large number of blood vessels. Thus, this explains the redness on its face and the fact that these areas have no hair, the blood vessels allow it to keep them warm. It can weigh up to 25 pounds (males) and 19 pounds (females). Moreover, they are very sociable, have daytime habits, and can live up to 33 years of age.

The mandrill is one of the monkey species of the “old world”, living in the tropical areas of Africa (from Congo to Equatorial Guinea). It’s also one of the largest monkeys in the world, as the males can weigh up to 82 pounds, whereas the females roughly up to 33 pounds. As for their coat, it has an olive-green or dark grey pelage and their face has blue and red vertical stripes.

With respect to its character, they’re very sociable animals as they can live in groups of up to 250 individuals. However, adult males are usually solitary. In addition, they collect their food from the ground while trying to avoid their main predator, the leopard.

These “New World” monkeys belong to the genus “Ateles” and are characterized by not having thumbs. The spider monkey lives in tropical forests of Central and South America, spending most of their day up in the trees. In addition, the biggest of this species, the black-headed spider monkey, can weigh up to 24 pounds for males and 21 for females.

Its name comes from their disproportionately long limbs. Their long, prehensile tails can measure 35 inches and are very flexible with no hair on the tips.

It’s slender in appearance, has four toes, and black to light brown hair. Moreover, it lives in groups of around 30 individuals and is quite territorial. Its diet consists of tree bark, seeds, fruits and leaves.

Also known as Carayá, the howler monkey is the southernmost species because it lives in South America: Colombia, Brazil, Peru, Paraguay, Bolivia, and Argentina. Moreover, its natural habitats are forests that are located near a swamp or a river.

Only the adult male is black; adult females and young ones of any gender are whitish or a buff-yellow color. These monkeys have a developed throat which allows them to produce their howling sounds (hence their name).

They use these sounds to mark territory usually at sunrise and sunset. In addition, they live in groups of up to 15 individuals. There are usually three males and the rest are females and young ones. As for their diet, they eat fruits, flowers, seeds, and stems.

The squirrel monkey lives in the subtropical forests of Central and South America. This genus (Saimiri) is among the species of diurnal monkeys living in the top of trees and their groups range from 35 to 50 individuals.

It eats frogs, insects, eggs, and fruit. It’s a very agile animal and its tail is longer than its body. In addition, its body is yellow in the lower part, grey in the center and its head and face are black.

This endemic species is native of the forests of Brazil, near the Paranaíba and San Francisco rivers. Most marmosets are around 8 inches long, weigh about 9 ounces (males) and 8 ounces (females). However, their most visible characteristic is two locks of white hair on each side of their face.

They possess a multi-color pelage, sprinkled with brown, grey, and yellow. Their groups consist of around 20 individuals, are territorial and hierarchical. In addition, they feed on small vertebrates, bird eggs, arachnids, insects, fruits, nectar, and sap.

This is an arboreal old world monkey, endemic to the southeast-Asian island of Borneo. Long-nosed monkeys are herbivores and move around by climbing from tree to tree and are also good swimmers. It has a pink face with a long, fleshy and bulging nose is its main feature. However, this aspect in males is related to sexual selection, as the females prefer males with the longest noses.

Did you know a group of monkeys is called a troop or a barrel? These fascinating animals are also threatened by their habitats being destroyed as well as by illegal hunting and animal trade.

Pet Monkeys – Why Is It a Bad Idea to Have One?
Like most exotic animals, the maintenance costs of pet monkeys are quite high. But there are many other reasons why it's not a good idea to have one. Read more »