The Use of Pheromones in the Animal Kingdom

Through the use of pheromones, the behavior of the animals is governed, both in terms of sexual attraction and in terms of being alert to dangerous situations or marking territory. 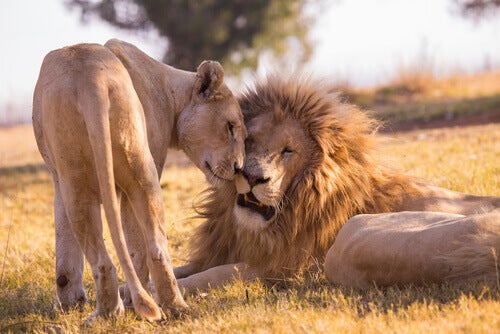 A pheromone is a chemical substance that animals secrete to attract and communicate with another animal of the same species. Pheromones are perceived through sweat, urine, or saliva, whereas hormones are transmitted internally, through blood. In the article below, we’ll tell you more about the use of pheromones in the animal kingdom.

Contrary to popular belief, this chemical doesn’t only have to do only with the estrus cycle or fertility level. It also serves to alert animals of dangerous situations or territorial boundaries.

They’re also present in humans, although they don’t have the same potency as they do in animals. Their use in humans has only to do with sexual attraction, while in animals, they govern the species’ behavior.

Pheromones in the animal kingdom

In the animal kingdom, pheromones are practically a means of communication between species. The segregation of this substance allows animals to remain alert to the behavior or empathy of other specimens.


Animals perceive them through their sense of smell, and specifically through the nasal organ called the vomeronasal organ. This organ consists of two canals located above the palate.

In some animals, such as cats, horses, or bulls, the pheromones that animals smell pass directly to this organ. Then, a behavior known as the Flehmen response occurs, which is when the animal raises its head and retracts its upper lip. This way, it allows the pheromones to dissipate in its saliva and reach the nasal passage.

These are classified according to their function and objective. In some cases, such as in ants, their use allows for tracking. At the same time, they use them to identify the surface in the exchange of food.

In veterinary science, pheromones have been used in the manufacturing of products intended for animals. Some of them serve to calm anxiety, while others stimulate mating.

The use of pheromones has also been demonstrated in humans, although their effectiveness hasn’t yet been proven. Such is the case with perfume manufacturers, which have developed lotions with pheromone additives.

The effects of pheromones in sterilized animals

Castration is a practice that’s carried out directly on the animals’ hormones. It consists of removing the source of testosterone in males and estrogen and progesterone in females. This action can affect the production of pheromones.

In these cases, males will have an odor more similar to that of females. In theory, this odor modification can cause the male to arouse sexual desire in other specimens of the same sex. However, this doesn’t mean that they’ll lose their interest in mounting females in heat.

At the same time, castrated animals decrease their territorial demarcation. There’s no longer a need to mark the territory they possess. This way, the so-called territory pheromones will be reduced considerably.

Do Dogs Go Through Menopause?
As the reproductive cycle of dogs is very similar to that of humans, is it possible for dogs to go through menopause? Find out in this article. Read more »
Link copied!
Interesting Articles
Birds
Discover the Emblematic Red Kite