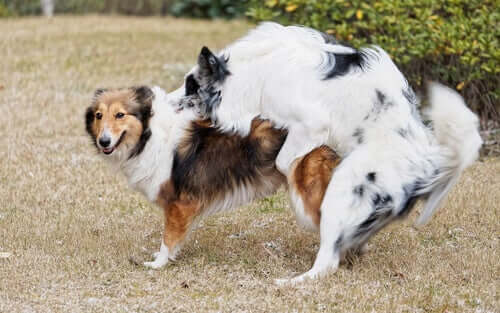 A dog’s behavior changes slightly post castration, either to a greater or lesser extent. Both males and females may show changes in their behavior straight away, or over time.

Castration is removing an animal’s gonads – only the testicles in males and both the ovaries and the uterus in females. As well as generating sex cells, gonads also release hormones. These hormones have different functions in the body, one of which is the development of sexual behavior, such as seeking a partner or parental care.

The first noticeable change in dogs post castration is behavior associated with pain. When a dog wakes up from the anesthetic, they’ll feel a varying degree of pain, depending on the anesthetic used by the vet. This is very important, because dogs can develop certain fears as well as it being a physical trauma. For example, they won’t let us touch them or they may try to bite us, etc. but these behaviors usually disappear.

On the other hand, vets usually recommend that the dog wears a cone, which will stop them from licking the wound. This is another negative impact on the dog, which they could find challenging if they can’t control their emotions.

To understand the effects that suppressing the release of sex hormones has on behavior, due to castration, we first need to learn about the hypothalamus-pituitary-gonad axis.

The hypothalamus synthesizes and releases a gonadotrophin-releasing hormone (GnRH). It acts on the pituitary gland and causes it to release gonadotropins, luteinizing hormone (LH), and follicle-stimulating hormone (FSH). The latter two are mainly carried out in the testes or ovaries and cause the release of testosterone in males and progesterone and estrogen in females. LH and FSH also function to stimulate sperm and oocyte production.

Testosterone has multiple effects on the body, especially during embryological development and puberty:

On the other hand, female hormones act as follows:

When the gonads are removed, the concentration of sex hormones decreases, but not abruptly. Mating behavior only reduces by 50% in males, 15 days after castration. The behavior of searching for females is the most reduced, by 80%.

In females, behavior linked to protection or jealousy may decrease. In some cases, a phantom pregnancy may also appear after sterilization.

It’s important to know that behavioral problems, such as aggressiveness toward other animals or people, mismanagement of fear, or separation anxiety, don’t disappear. This is because these hormones aren’t sex hormones, but, rather, cortisol, serotonin, or dopamine.

Practically, castration doesn’t solve all behavioral problems. But these can change if you work hard, and dedicate yourself to your dog, showing them affection. However, it does help to prevent or avoid certain diseases such as tumors, both in males and females.

It’s Possible to Re-educate an Aggressive Dog
Aggression in dogs is a common problem. However, it is possible to re-educate an aggressive dog if you can identify the root cause and go to a professional. Read more »
Link copied!
Interesting Articles
Care and Well-being
Is Wearing Clothes Comfortable for Dogs?