Protective dogs: Can your dogs sniff out bad intentions? 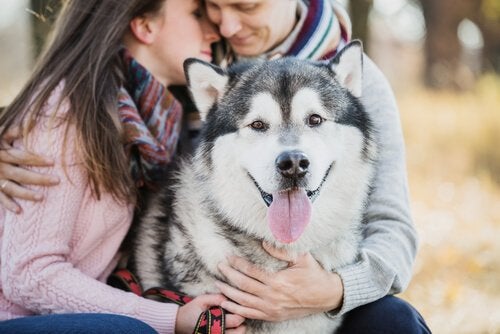 They say dogs are a man’s best friend, and that’s often true. Once you forge a relationship with them, you’ll have someone that will always stay by your side and be willing to sacrifice himself for you. Therefore, it’s not difficult to believe that dogs can protect you from people with bad intentions. This instinct isn’t an act of jealousy, but rather an act of pure love that only a pet can give. Continue reading below:

Dogs can detect the intentions of friends and strangers

Your beloved four-legged friend protect you from all types of danger. If you need more convincing, consider a recent study published by the journal Current Biology. According to scientists, dogs are capable of predicting certain human actions.

This study shows that dogs were more likely to follow someone (owner or somebody else) around a room after making eye contact with them. This same “ability” is found in babies between six months and the age they began to speak.

Dogs are sensitive to the signals and clues that humans give off; this is because of the way they were domesticated, in order to find a means of effective communication between species that didn’t share language.

So, how could dogs express themselves? Through facial expressions. Though dogs first helped with sheep herding and hunting, then later on became household pets. Therefore, those initial traits are still present.

A previous study, published by the journal Learning & Behavior, indicated that domesticated dogs beg for food from people who look at them, and don’t beg with people who don’t pay any attention to them. Dogs can learn up to the meanings of 165 words – about the same number as two-year-old children.

Another previous test compared the attitudes of two groups of dogs. In the first group, a person says “Hello” to the dogs while making eye contact. In the second, the greeting didn’t include eye contact. The second group ended up showing less interest in the human.

You may not always realize it, but dogs are very intelligent creatures with great intuition. They’re conscious of things that humans might pay less attention to. They can tell when you’re happy, mad, or even jealous.

They’re also capable of recognizing when someone doesn’t seem to be totally trustworthy. In this case, a dog won’t follow that person’s instructions, but will still pay close attention to them (in order to be one step ahead of any suspicious activity).

Animal Cognition published an experiment from the University of Kyoto in Japan demonstrating that dogs realize when someone can be trusted. They conducted their study on 34 dogs.

The dogs participated in three different rounds where they were shown the following objects: one container of food, one empty container, and one container with food hidden inside. The dogs were used in this experience to evaluate if a person was reliable.

After the three rounds, the animals followed the instructions of whichever person they considered most trustworthy. According to the head researcher Akiko Takaoka, the dogs were able to evaluate the humans’ integrity because of their sophisticated social intelligence is even more developed than humans.

How do dogs protect us from people with bad intentions?

Based on these studies, you can understand why your pet can help you avoid certain “toxic” people. For example, if you bring a new “friend” into the house and your dog barks, moans, glares, or shows exasperation…be careful.

A dog’s reaction is not something to be taken lightly. Pay close attention to his behavior when different people are around. If he remains calm and relaxed, or even falls asleep, there’s no issue. The dog has accepted the person and decided there’s nothing to be afraid of.