This sport is most suited for medium-sized or large dogs. The most important thing to bear in mind is their physical condition. 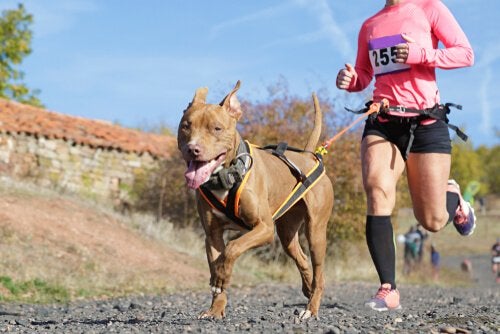 It’s an activity that’s increasingly becoming popular worldwide. Canicross involves running with your dog, with your dog attached to your waist with a leash. In this article, you can learn all about this exciting sport.

Canicross is becoming more common in Europe. Although it might seem quite modern, the truth is that’s quite a long-standing tradition on the continent. There are even an official federation and champion athletes and dogs at high competitive levels.

It basically involves running with your dog while they have a harness one that’s attached to your waist with a leash.  Normally, the competitions are held in the outdoors an open area, but sometimes some are held in the snow, with the dogs wearing special snowshoes.

The teamwork between the dog and their owner can be unbeatable and, by doing exercise together, they’ll have a better relationship than other pets and owners. As if this weren’t enough, you can enjoy the outdoors together, by hiking in mountains, forests, and beaches during the competition.

To participate in Canicross you don’t need that much: a Canicross harness (walking harness aren’t really suitable), a well-fitting belt to protect your waist from the pulling of your dog, and a shock-absorbing leash. And obviously, your faithful friend to join you on the adventure!

One of the most frequently asked questions about this sport is: what dogs are suitable for Canicross? Although almost any healthy dog over the age of one can train and compete, the truth is that the most common competitors are medium to large-sized dogs that weigh between 20 and 35 kilograms.

The most appropriate breeds for Canicross are the strongest and fastest ones, such as the Weimaraner, Siberian Husky (or any Nordic dog), German Shepherd, Border Collie, Labrador Retriever, or Belgian Shepherd… also mixed-breeds!

The dogs which are not appropriate for this sport are Molosser dogs or those with short snouts (brachycephalic): Pugs, Bulldogs, Boxers, Saint Bernards, Neapolitan Mastiffs, or Bernese Mountain Dogs. Their physical traits mean they can’t do this exercise.

How to prepare for Canicross

Aside from the dog breed, in order to be successful in Canicross, you and your dog will have to train and be perseverant.  Also, both of you should enjoy the sport.

When participating in this sport, be careful with your dog because sometimes they are so faithful that they pass their own physical limits just to be by your side.

Once you have the approval of these professionals, it’s important to advance gradually, particularly if your dog hasn’t done this sort of exercise before. You’re not going to run 20 kilometres on your first day. You want to do well in this sport, then you should remember that progressing and enjoying these type of activities are key.

Be careful when you train outside during the hottest times of the day. It’s best to go out during the morning or the evening and in temperatures lower than 20°C. Hydration is also really important: before, during, and after training or races.

These competitions take place in natural spaces in the mountains or the countryside and can be between 5 and 10 km. Depending on the terrain, they can vary according to course difficulty levels.

Before beginning, your dog needs to pass a veterinary check-up to be approved for running. There are some races with up to 50 pairs participating!

In all cases, it’s important for the animal to respect their owner. Among the rules and sanctions are the following: the dog must not run behind the athlete, the athlete cannot tug on the leash, and the running may not abuse the dog (either physically or verbally) at any point during the race.