Why Do Siberian Huskies Have Blue Eyes?

Siberian Huskies are well-known for their resistance to extreme temperatures and their beautiful blue eyes. Have you ever wondered why their eyes are this color? 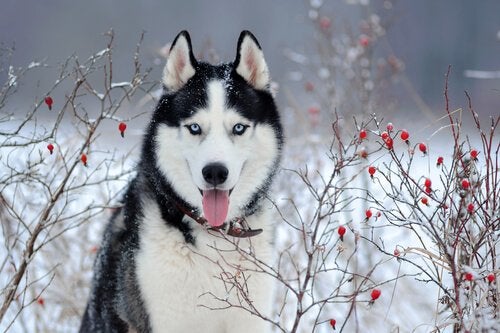 Siberian Huskies are one of the most well-known dog breeds. Their face with blue eyes (or different colored eyes) really grabs people’s attention much more than the dog itself.

SO, would you like to know why these beautiful dogs have their eyes like this? Recent research seems to have found the answer.

For many people, this eye color reflects the images of the cold Siberian terrain. Their gaze can freeze you and steal your heart. However, it’s possible for their eyes and fur to change color as these dogs age. Their final colors are determined once they reach the age of six months.

This year, scientists carried out the largest study to date about comparing canine genetics. They analyzed  DNA to explore — among other things — their eye and fur color. Researchers found a genetic modification which could be the cause of this breed’s eye colour.

The research was carried out on a population of 6,000 Huskies. The owners had their dogs take DNA tests done in order to identify or confirm the “purity” of the breed and identify possible health risks for their faithful friends.

The success of this study was down to the fact that scientists had access to a large amount of data through these testing kits.

The information was gathered through an online survey that was filled by the owners, who voluntarily submitted their data. They also offered photographs of their dogs to complete the researchers’ records.

Analysis of the data revealed that a mutation of the canine chromosome 18 was strongly associated with the blue eye colour found in Siberian Huskies. This genetic change appears close to the ALX4 gene, which is linked to eye development in mammals.

There are several dog breeds that have blue eyes like Australian Shepherds and Border Collies. However, in these breeds, the blue eyes are the result of a recessive trait. This means that they need two copies of the mutated gene to produce the blue eye color.

This genetic variation is produced in the HERC2 and OCA2 genes of the human genome, causing blue eyes. The mutation in Siberian Husky genes causes a lower pigment production in the eye. This reduction in pigment makes the eye look blue.

According to experts, there is no blue pigment. It relates to how the light enters and leaves the eyeball. This creates the appearance of the blue color, just like the way the sky looks blue even though it isn’t.

One of the most interesting aspects of this research was the large amount of data that the researchers obtained. In previous years, the researchers studied the neurological conditions in German Shepherds.

This study proved a real challenge to acquire the DNA of 40 examples of the breed because they had to travel many miles with materials and equipment to take tests.

The voluntary participants in this study performed the tests themselves and sent in the results. They then filled out an online survey with the details of their dog’s traits. This method has laid down the basis for a new way of studying genetics in the 21st Century.

The owners of the Siberian Huskies studied were all too happy to support the study. Likewise, contributing to scientific research isn’t something that people often have the chance to do, making this something even more special.

This kind of collaboration has inspired researchers who have decided to continue studying the canine genome. There are now projects being created to learn more about the morphological characteristics of Siberian Huskies, as well as other studies linked to their health.