5 Animals That Live in Swamps

When we think of swamps we imagine a very humid place, full of water and plants. 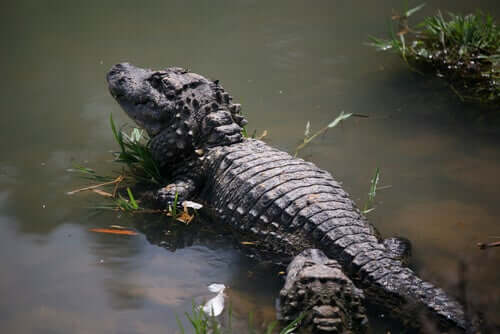 We think of some swamp creatures as “monsters” because we can’t imagine what it takes to survive in these habitats. Do you want to learn about some animals that live in swamps? We will talk about this further in this article.

Animals that live in swamps

First of all, we need to define what a swamp is: They are places where water from rivers, lakes or rain cannot ‘escape’ and become stagnant or flooded. It’s normal to see this at the mouth of large rivers and in deltas, where sediments build up and block water flow.

There are swamps all over the world, the most important being those formed at the mouths of large rivers, for example: Guadalquivir, Rhone and Danube (Europe); the Nile, Tigris and Euphrates (Africa and the Middle East); Amazon and Mississippi (America), and Mekong (Asia).

In its waters you’ll see a lot of fauna and flora that has been able to adapt to this somewhat hostile environment. Some animals that live in swamps are:

This reptile is known as a ‘living fossil’, because it has lived on the planet for more than 230 million years in the Yangtze River area. It looks very similar to the American alligator, but is a little smaller. It can measure up to 6 feet and weigh more than 66 pounds.

The Chinese alligator has bones on its skin, making it look “armored”, and has a long tail that allows it to swim quickly. It’s nocturnal and feeds on fish and frogs.

It’s the only species of spider that can survive underwater, hence its name. It only needs to come to the surface for air once a day. The rest of the time it captures oxygen in its abdominal hair.

The main prey of the water spider is aquatic animals, especially young crustaceans and fish. Like other spiders, they can bite their victims with strong fangs.

Also known as the pink river dolphin, it lives in rivers and swamps formed by the Amazon and the Orinoco, both in South America. Their long snouts and flexible necks allow them to stir up the mud to search for their prey for up to two minutes without having to come up for air.

Also, the Amazon river dolphin has amazingly adapted to swamp life: they have small eyes that don’t change their movements in murky waters. They’re able to emit sounds and echoes to locate each other, and know where they are, just like other cetaceans.

Probably the most recognized swamp animals in existence. They’re one of three species to inhabit Africa and the second largest on the planet. Crocodiles have flat heads, can measure 32 feet and weigh about 2000 pounds.

They have long snouts and large, strong teeth, capable of tearing their prey apart in a matter of minutes. They use different “tricks” to attack animals that come to the shore to drink or bathe. They’re also very slow on land, but very fast in the water.

Another of the most recognized swamp animals. Hippos are one of the great African mammals, that, believe it or not, live off plants and fruit (they’re herbivores). During the day the hippos rest in the mud, and only come out to eat large amounts of food after the sun goes down.

They live in very well organized groups. The young are placed together and adult males guard them. The males are very territorial and will fight to the death. The females stay together at a safe distance to avoid getting hurt.