Did you know that there are some viruses that affect only crocodiles, and others that they share with other animals? In this article we'll tell you about the 6 most common viruses. 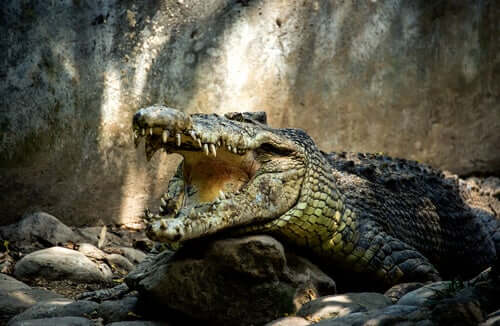 Some viruses are specific to certain animals, but others can spread between species and even to humans. In this article, you’ll learn about some of the most common viruses that affect crocodiles. You’ll also find out which of these viruses they share with other animals and with humans.

Viruses that can affect crocodiles

This virus is somewhat similar to human smallpox, and goes by the name of parapoxvirus. It mainly affects hatchlings and young crocodiles.

Investigators have detected the disease in certain areas of the United States, South America and South Africa. It can also affect caimans. The virus is generally transmitted through water.

It causes sores in the mouth, on the skin of the head, along the back and on the feet. These sores start off as tiny circles, normally measuring less than a millimeter. They appear between the crocodile’s scales, and are almost unnoticeable.

As the disease progresses, the sores start growing in size. They then become irregularly shaped, and form a scab that can cover several scales.

Recovery starts after a prolonged period without symptoms, and depends on environmental conditions. Complete recovery can take up to six weeks.

Researchers believe that lone caimans can host the virus without developing the disease.

There isn’t a specific treatment for this virus. However, a comfortable environment and plenty of food can facilitate a quicker recovery. Prevention measures for crocodile farms can include reducing causes of stress for the animals, improving their hygiene, and making sure they have clean water in their habitat.

The virus that causes this infection is an adenovirus. It normally affects crocodile hatchlings, and has been diagnosed mainly in South Africa.

It can be transmitted through water, although there have been cases where the disease may have been transmitted directly from the mother to the egg. The incubation of the virus lasts between two and eight weeks before symptoms appear.

Symptoms can vary from lethargy and anorexia to just being a bit off-color. However, the main problem appears when the virus causes chronic hepatitis that eventually leads to the death of the animal.

There are no known treatments for the virus. Having said that, the use of antibiotics can help with possible secondary infections, which can improve the crocodile’s general condition.

How can we prevent this virus on crocodile farms and in zoo and wildlife sanctuary populations? Much the same as with the prevention of other viruses, it has a lot to do with improving hygiene and providing clean water for the animals, as well as reducing stress levels.

The cause is a virus in the family of paramyxoviruses, which also causes this disease in birds. Symptoms don’t normally appear in crocodiles. However, deaths have occurred.

In some cases, investigators positively identified Newcastle’s disease in the crocodiles by means of autopsies. It seems that the crocodiles received the virus at crocodile farms where they had eaten contaminated domestic poultry.

The paramyxovirus is spread by contaminated feces and can infect other animals, whether they be other crocodiles or birds that come into contact with them.

This disease, as its name describes, occurs most commonly in horses. However, antibodies to the disease have also been noted in caiman blood, which adds this species to the list of affected animals.

Having said that, there are no known cases where crocodiles develop the common flu symptoms, although they can be infected with the virus.

What’s the virus that causes flu in all animals? It’s a type C influenza virus. The disease in crocodiles is commonly related to high stress levels in the animals from overcrowding, handling and fluctuations in the temperature of their environment.

In some cases, the mortality rate among crocodiles is very high due to common flu.

This virus has been seen in crocodiles around 2 to 3 years old, and is also associated with situations that raise the animals’ stress levels. It generally causes respiratory tract problems, and can affect both humans and different kinds of animals.

In the case of crocodiles, incorrect handling, as well as inadequate environmental conditions can make it more likely that the animals will suffer from viral infections.

Reptiles
The Largest Ophidian in the World: the Anaconda

It’s large, fearful looking, and belongs to the boa family. The anaconda is the largest ophidian in the world and…