How Do You Cool the Water in the Axolotl's Tank?

The axolotl is one of the most fascinating amphibians you can have as a pet. Unfortunately, keeping the water in its tank at a low temperature can be a challenge. 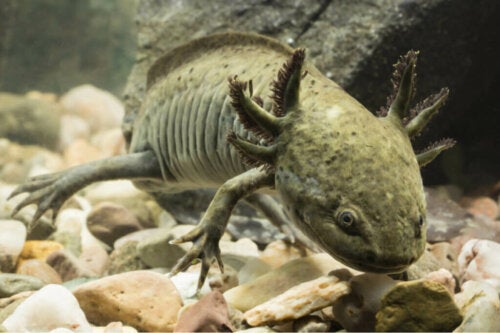 The axolotl is one of the most fascinating species of amphibians we can find in nature. It remains in a permanent aquatic larval state, unlike the rest of the newts and salamanders. This animal is an interesting pet, but the axolotl’s tank must remain cold all year round, something that not everyone can achieve.

Here are some tips that every axolotl owner should keep in mind. In order to endure the warm seasons and protect this amphibian, certain energetic and logistic sacrifices are necessary. If you want to keep your animal’s tank cold in the warmest environments, read on.

Why is temperature important for the axolotl?

The axolotl (Ambystoma mexicanum) is a tailed amphibian endemic to the lake system of the Valley of Mexico. This animal has been bred for decades in captivity and, therefore, many terrarium enthusiasts have had the opportunity of acquiring a specimen at some point during their lives.

The majority of the specialized websites indicate that the water in this animal’s tank must remain constant at 20°C (68°F) or less. However, in Xochimilco and Chalco, places where it lives, you can get environmental temperatures of 30°C (86°F) in summer —and about 23°C (73°F) in the water.

Of course, this doesn’t imply that you should neglect the temperature in the tank. We’re only trying to report that there are indeed testimonies of people who have kept their axolotl at about 22-23°C (72-73°F) during certain periods of time without serious complications.

Even so, it’s necessary for the owner to be aware of the following clear signs of stress caused by high water temperature:

The axolotl gets oxygen from the water through its external gills, skin and lungs. Levels of oxygen dissolved in water decrease with temperature, so, in very warm water, the animal is literally drowning. For this reason, it’s essential to be especially careful with this issue.

How to keep the axolotl’s tank cool

Having explained the importance of water temperature when taking care of this funny animal, it’s time to give you a series of tips in order to keep its tank cool. Here we go.

The location of the axolotl’s tank

You should take into account that the location of the tank is a very important factor. To avoid the accumulation of excessive heat as much as possible, you should consider the following tips:

There are many models of cooling fans for the axolotl’s tank, which can be found in pet stores at accessible prices. You can place as many as you need because they move the water superficially. Consequently, the animal, when staying at the bottom of the tank, won’t even notice.

Note that this method of cooling causes the water to evaporate. Remember to replenish the evaporated part daily with water from the refrigerator, or frozen water. This water must have always been previously dechlorinated.

According to reports from specialized websites, there are tank cooling fans that can lower the water temperature to 4°C (39°F).

Cold bottles and ice cubes in the axolotl’s tank

Of course, this is the most famous and, unfortunately, the least effective method. Placing cold bottles in the aquarium should only be considered during heat waves or moments of urgency, as their effect is transitory. Even so, putting a cold bottle in the animal’s tank will reduce the temperature by a few degrees for a while.

Without a doubt, this is the best option. Aquarium chillers work perfectly when it comes to maintaining the desired temperature. Unfortunately, they have one significant drawback: the price. Most of them are in the range of 150-250 euros, or approximately 300 American dollars. Time to empty your wallet.

A great effort for a great animal

As we’ve seen in this article, maintaining the temperature of the axolotl’s tank when it’s 30°C (86°F) outside, is a great sacrifice. You’ll need control, patience and, above all, a large electrical outlet to connect cooling fans and chillers.

However, the effort is worthwhile. The axolotl is one of the most fascinating animals in the world of exotic pets. Therefore, it deserves proper care and attention from its keeper.

All About Keeping an African Dwarf Frog
Have you ever dreamed of keeping something more exotic than fish in an aquarium? Maybe the African Dwarf Frog is the animal for you! Read more »
Link copied!
Interesting Articles
Amphibians
Phantasmal Poison Frog: Care and Breeding in Captivity