With exotic pets becoming more and more popular around the world, we want to take a look at some of the different types of domestic snake. 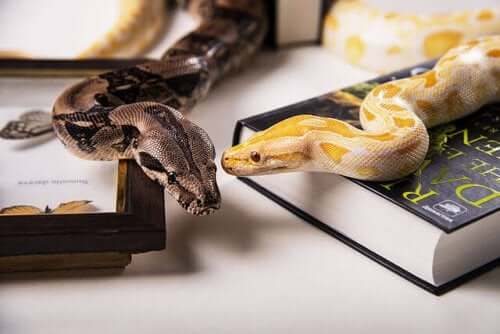 Before you start trying to decide which types of domestic snake you’d like to own, it’s important to make sure that you’re actually allowed to keep them in captivity. If you take a look online, you’ll find a detailed list of all the exotic species considered illegal in your country.

Owning certain kinds of reptiles is considered a crime, as it can help to finance illegal wildlife trafficking. In many countries, it’s also illegal to breed any animals at risk of extinction, no matter what the species.

If you’re thinking about buying an exotic pet, you need to be able to verify where that animal has come from, and choose your supplier carefully. Don’t buy from individuals, or unlicensed pet stores, as there’s a high risk of inadvertently buying from black market traders.

How to choose a domestic snake

Snakes come in a range of different sizes. While some can measure over 30 ft, others measure no more than a few inches.

It’s important to choose a species that’s suitable for the size of your home. It’s also worth remembering that an animal can quickly develop health and behavioral problems if kept in an unsuitable environment.

Many snakes live on a diet of mice or small mammals in the wild. This can make it more difficult to provide them with the right diet in captivity.

We would recommend choosing domestic snakes that feed on a diet of insects, crustaceans, fish or snails. This diet is much easier to deal with, and these items are often sold fresh in pet stores.

Some snake species are more sociable than others, and find it easier to adapt to family life. Many people actually choose to buy them as children’s pets.

Some species of snake can even be trained to do tricks and play with their owners.

There are several species of wild and venomous snake that are prohibited by law in many countries around the world. When kept in captivity, these snakes can pose a serious risk to owners and other pets.

The same goes for wild constrictors, which can become aggressive if not given adequate care.

Having a child in the house is a deciding factor when it comes to choosing a pet. This also applies to snakes.

Many children are curious about the idea of keeping a snake as a pet. If you agree to let them have one, it’s best to choose smaller species, which are easier to train, handle and socialize.

What are the most common types of domestic snake

In this next section, we’ll show you the domestic snakes that adapt best to life in captivity.

We would recommend starting with the species that are easiest to handle, and require the most basic level of care.

Every type of domestic snake requires a certain level of knowledge and preparation on the part of its owner. Responsible ownership is essential for ensuring they live a long and happy life.

Everything You Should Know About Pet Snakes
Snakes are one of those animals you either love or hate but few are indifferent to them. Would you like to know what it takes have pet snakes? Read more »
Link copied!
Interesting Articles
Reptiles
Types of Lizards in the Animal Kingdom