The CITES Treaty and Its Improvements

Have you ever heard about the CITES treaty? Today we're going to tell you about the latest developments and improvements. 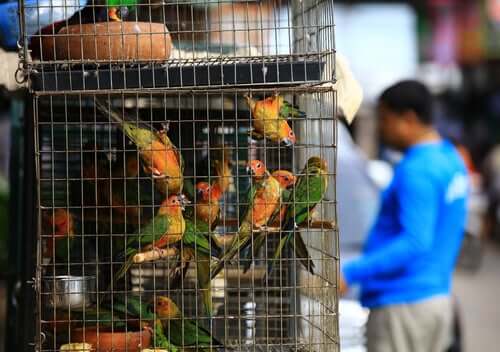 The CITES treaty (Convention on International Trade in Endangered Species) is an international treaty about the rights of wild fauna and flora. It seeks to ensure that trade doesn’t become a threat to animals’ survival in their natural habitat. So, in today’s article, we’re going to tell you about its benefits.

Why is the CITES treaty necessary?

Currently, estimates indicate that international wildlife trade rises to billions of dollars and affects hundreds of millions of species every year. This kind of trade includes everything from live animals to seeds to plants and their natural derivates.

Once wild animal and plant trade goes beyond the borders of any country, the enforcement of regulations requires international cooperation.

The CITES treaty was the result of a resolution in the International Union for the Conservation of Nature (IUCN), in 1963. But, it didn’t become official until 1975. In addition, the countries and organizations that joined the treaty since then did so voluntarily.

The benefits of the CITES treaty

Each one of the states that comprise this agreement is known as a “party.” And parties meet on a regular basis to make decisions about how to improve the functioning of CITES in the future.

One of the improvements of the CITES treaty is that they tightened the laws in regard to elephant trade. Thus, the extraction and trade of live wild elephants, including their sale to zoos, is now prohibited. As explained by the Department of Ecology, the latest CITES18 treaty prohibits the relocation of elephants outside their range. There may be exceptions, but if this is the case then they must be endorsed and guaranteed by the Animals Committee and IUCN.

Until now, wild elephants could be exported alive to any recipients deemed “appropriate and acceptable.” But the lack of concreteness of this definition left open the fact that these animals could end up in inappropriate destinations. As a result, there would be no control over their fate. Therefore, the global situation of elephant populations decreased dramatically, especially when you take into consideration the illegal trade of ivory and fur.

According to the data, these factors led to trade increasing to about 700 live specimens between 1990 and 2017. Five hundred of these went to the circus and the rest to zoos around the world.

The African elephant is the largest land animal on the planet and one of the umbrella species of wildlife. Unfortunately, the density of their population is now down to less than 500,000 specimens. The last census, which took place in 2016, reveals there are only about 350,000 elephants in the savanna.

Within the latest CITES treaty, there was a formulation of a set of control and protection measures for 18 species, mainly sharks and rays. Thus, this decision forces the countries that market and export these species to maintain adequate traceability of their catches and exports. This is mainly to ensure they do everything within the legal and sustainable limits.

“Today’s decisions promise a brighter future for highly threatened sharks and ray species, as international trade was the main factor in their decline and the low increase in their population,” says the president of Shark Advocates International, which is part of The Ocean Foundation.

Thus, the new CITES measures include:

Wildlife Protection – What’s the Law?
There are many federal wildlife protection laws, many of them have a very specific purpose such as protecting eagles and other individual species. Read more »
Link copied!
Interesting Articles
Animal Rights
AAP Primodomus: Europe's Big Cat Sanctuary