The Marine Iguana: Ruler of the Galapagos

The marine iguana is the only one of its family that lives in aquatic environments and that feeds exclusively on algae. Learn more in today's article. 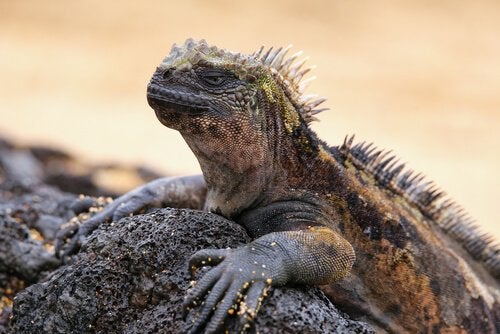 When we think of the Galapagos Islands, we usually think of two animals: the giant tortoise and the marine iguana. In this article, we’re going to tell you about the latter, an endemic and extraordinary species that’s worth learning about.

Its scientific name is Amblyrhynchus cristatus and it’s a scaly reptile that belongs to the Iguanidae family. It’s an endemic species of the Galapagos Islands, where it inhabits the rocky coasts of this archipelago of Ecuador. However, it also lives around the local beaches and mangroves too.

It’s the only iguana of its kind, and it’s also the only one that lives in a marine environment.

The male marine iguana measures approximately 5 feet and can weigh up to 33 pounds. The females, on the other hand, are half the size and much lighter.

Since they’re cold-blooded animals, they have to spend many hours a day in the sun, on the rocks of the coast. This helps them raise their body temperature. Since they’re black, they can absorb heat faster once they leave the cold waters, or after being covered by the waves on the shore.

When swimming, the marine iguana slows down its heart rate to make sure it doesn’t lose too much accumulated heat. They can even keep their heart from beating for several minutes without running the risk of dying.

In addition, they can submerge themselves up to 30 feet deep thanks to the webbing between their fingers. They’re actually excellent swimmers!

Due to their size, and the fact that they have spines that go from their head to their tails, the adult males don’t have any natural predators on the island. However, females, their eggs, and newborn marine iguanas do have predators. They have to watch out for snakes or the Galapagos hawk.

As far as reproduction is concerned, the females emit a very strong odor that ‘calls’ the males. The males will then mate with more than one partner in the same season. They’re responsible for finding different materials to build the safest nest they can.

Additionally, they have to ensure that the eggs will be kept at the right temperature for survival. Marine iguanas don’t hatch like birds and, once the babies are born, they have to take care of themselves.

A very interesting fact about the marine iguana is that it feeds almost entirely on marine algae. Adult males are the only ones capable of swimming in search of food because they’re so much larger than the rest.

Both the females and the young have to wait for the tide to go in in order to find food. Once that happens, the algae will adhere to the rocky surfaces.

The marine iguana’s weight can vary up to 25% depending on the time of year and the food that’s available. In spring and summer, there’s more algae. They store fat for the winter and autumn, when there’s less marine vegetation.

Even though they have sharp claws and teeth, they don’t eat meat, even though many people think they do. These ‘tools’ help them to scrape the algae that sticks to the rocks.

Additionally, it’s worth noting that the marine iguana has to release the excess salt it consumes from the algae. How do they do that? They expel the salt in the form of crystals through the nasal gland… kind of like sneezing!

Due to human life on the Galapagos Islands, the marine iguana is a vulnerable species that can be attacked by dogs and cats, or trapped in fishing nets. Other risks lie in the pollution of the water and beaches, because they sometimes eat plastic bags thinking that they’re algae. In addition, they’re negatively affected by hunting and poor tourist practices.

The marine iguana is an amazing species that has been able to adapt to a hostile environment that’s far away from any other ecosystem. That’s why it’s worth looking after and protecting them. 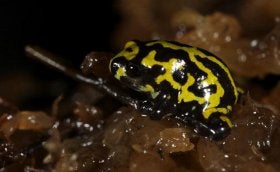 The corroboree frog is an iconic amphibian in Australia. The colorful patterns on their bodies, their venomous capabilities, and the gradual decline in their population have made them a major subject of research and national projects to keep them from… 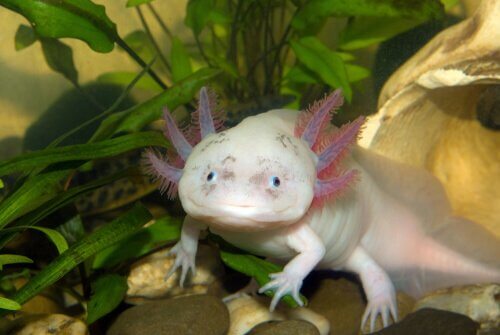 The axolotl can be many different colors including black, gray, gold, albino, and white. They’re relatively easy to take care of, but they live their whole lives in the water. For that reason you have to make sure their tank… 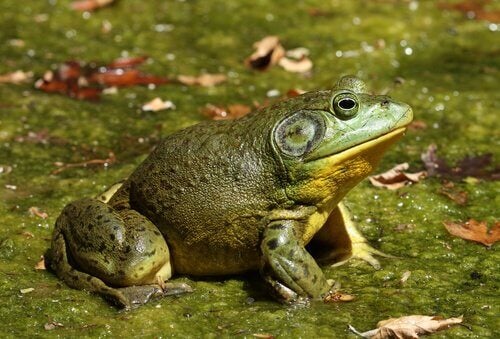 The bullfrog is an invasive species that lives in almost all parts of the world. Not only is its birthrate high, but it’s also aggressive. Therefore, it’s capable of displacing and destroying other weaker species. The bullfrog is an amphibious… 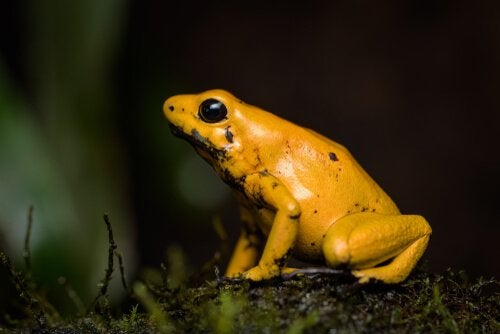 When you think of poisonous animals, the first ones that probably come into your head are snakes or spiders. However, there are also some frog species with this ‘ability.’ One example is the golden frog, also known as the golden…