The intellectual capacity of this scavenger bird that lives throughout the entire planet, has been subject to many scientific studies. Some are even able to steal food from their own kind 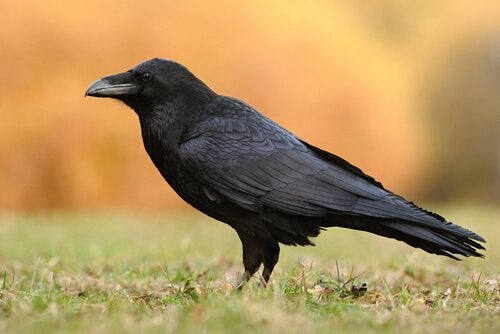 Crows are some of the most intelligent animals in the world because they are capable of commanding the predators to open up an animal carcass for them to later feed on. In this article, you can learn about some species of crows. There are more than you can imagine!

How many species of crow are there?

The genus of the Corvus is a large family, it makes up more than 40 different subspecies that live in almost every part of the planet. Although most are black, there are also other species of crows with gray or white feathers. Some of them are:

The common raven that’s shown in the picture above, is the most “famous” of all crows because they live in almost the entire northern hemisphere. They measure around 70 centimeters in length and weigh just under two kilos.

Although they travel in groups when they’re young, when they form couples, they remain together in the same territory for the rest of their lives. Their diet is based on carrion, insects, fruits, grains and small animals.

These crows feathers are completely black with a similar color to their legs and beaks. They have the largest brain of all birds, and this allows them to mimic sounds and hide shiny objects.

Also known as the Jungle Crow, this crow lives in the forests, gardens, parks, fields, and farmlands of Southeast Asia. In Japan, it has colonized some cities, feeds on garbage, and “steals” objects attractive objects, such as aluminum and glass, to build its nest. These crows are considered a pest because its population has increased so much in a short period of time.

This crow can grow more than 60 centimeters in length. It has a fairly broad and somewhat pointed beak and grey legs. Its feathers aren’t completely black, and its lower body and head are more of a dark-grey.

This raven is black just like its relative the common raven. However, they are different in size because the American raven doesn’t exceed 50 centimeters. It lives in the United States, both in the forest and the desert.

One of its main traits is its call or cry that’s short, fast and strong. When this animal makes that sound, it moves his head up and down, as though he were saying yes. Sometimes, it can imitate the sounds of other birds.

Its entire body is black, it has a long tail feather, and its beak is about five centimeters long, but this can vary in different regions. Its one of the most well-known crow species, but it isn’t very widespread.

Endemic to the Solomon Islands and Oceania, this crow forms small families that stick together to collect fruits and insects. When it isn’t eating, it hides among the foliage and treetops.

With a sturdy, but not very tall body (about 40 centimeters), this bird has a short tail and is rectangle-shaped. Its head is quite large in relation to its torso and its ivory beak and eyes with white irises draw it a lot of attention. This is what makes it different from other crow species.

Also called the “Northwestern Crow,’ and its scientific name is Corvus caurinus, this is another of the endemic birds of North America. They are specifically found in the northwest, between Alaska, British Columbia, and  the State of Washington. They prefer beaches and coasts, but can also be found in urban areas.

Its feathers are just like the common raven, but it differs in size (the Alaskan Raven is about 10 centimeters smaller). In terms of diet, it eats fish, crab, mussels, shellfish and marine debris.

There are no differences between the sexes other than the females having an incubation patch and males having a cloacal protuberance. The life-long partners nest in cliffs, shrubs or trees, and females can lay around four or five eggs annually.