6 Birds that Live in Spanish Gardens

Fluttering around the beautiful landscapes of Spain are a number of different species of birds. Today, we'll look at 6 birds that live in Spanish gardens. 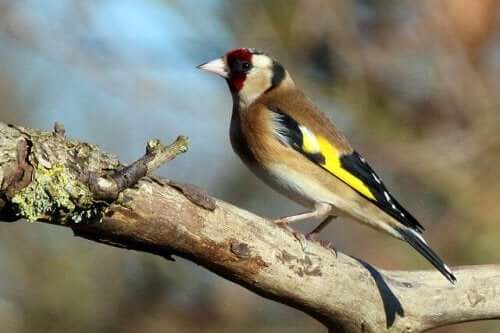 There are many birds that we can find in gardens and parks throughout all of Europe. If you’re in Spain, then you might be interested in discovering some of the main species you can find in this small ecosystem. Identifying birds by their feathers and their song can be complicated. Therefore, we want to present you with information about the most common birds you can spot in Spanish gardens.

The European goldfinch (Carduelis carduelis) is one of the most common passerines in all of Europe and in Spain. In fact, this Iberian country has nearly 3 million specimens. These birds visit gardens in search of seeds from wild plants. And while they’re there, they’ll enchant you with their beautiful song, which is one of the most well-known tunes, similar to that of the canary.

The European goldfinch is similar to the sparrow in size, but quite different in regard to its appearance. This bird has a very unique plumage, with a red, white, and black head. Its body is white and brownish, and its wings have a distinctive yellow stripe. As for its beak, it’s cone-shaped. Males and females of this species are very similar, and there is no sexual dimorphism.

Just like in the United States, the sparrow is perhaps one of the most well-known birds to visit Spanish gardens. Also known as the house sparrow (Passer domesticus), it’s now disappearing from many cities. These birds have diverse shades of brown all over their bodies. The males of this species have a much more colorful head, with shades of black and brown.

Despite their wide distribution today, these birds didn’t originally exist in the United States. Rather, they arrived as an invasive species on boats. Unfortunately, over the course of their history, humans have targeted them for different reasons. In Egypt, for example, these birds were considered an omen, similar to the crow in other cultures. In China, these birds were seen as a plague, a situation that nearly led to their extinction.

Despite their enormous distribution today, these birds didn’t originally exist in the United States. Rather, they arrived as an invasive species on boats.

The common blackbird (Tordus merula) is also a frequent visitor to Spanish gardens, but is larger in size than the goldfinch and the sparrow. Males are unmistakable, given their intense black coloring and their orange beaks, especially in the summer. At the same time, females and youth have a feathering that’s more brownish and mottled.

These birds are quite intelligent, and it’s common to see them separating leaves from the ground in the fall to look for food. It’s worth pointing out that their song is very sweet and melodic, although they tend to sing very early in the morning.

One of the best-known birds is the European robin (Erithacus rubecula). This passerine is very easy to recognize given its red breast and musical song. One of the main characteristics of this bird is its behavior. European robins are very sociable and daring, and it’s common for them to investigate our activities and even follow along on our walks.

Like other animals, these birds have an amazing orientation ability, thanks to their biological magnetic compass. British gardeners are especially appreciative of these birds. What’s more, in Nordic mythology, they’re considered to be related to Thor, the god of thunder.

One of the main characteristics of this bird is its behavior. European robins are very sociable and daring, and it’s common for them to investigate our activities and even follow us on our walks.

This bird belongs to the parida family and is easy to recognize in Spanish gardens. The great tit (Parus major) is a small species with a black stripe down its yellow body, clearly marked white cheeks, and an olive green back.

In regards to food, the great tit consumes insects and seeds. As for their nature, these birds are considered to be quite aggressive. In fact, they’ve even been spotted attacking the chicks of other small birds.

A beautiful combination of blues and yellows make the Eurasian blue tit (Cytianistes caeruleus) stand out from other species. This bird is a very active insectivore and is one of the habitual inhabitants of birdhouses in Spanish gardens and parks. The song of the Eurasian tit is similar to that of the great tit, but less powerful. Unfortunately, insecticide affects these birds greatly.

Bluethroat Nightingale: All About this Wonderful Bird
Not only does the bluethroat nightingale have striking colors, but it can also emit sounds that imitate those of other species.  Read more »
Link copied!
Interesting Articles
Birds
Discover 5 Different Types of Owls