Competition Between Herbivores In The Wild

Competition between species is a natural phenomenon that's often observed in wild animals. 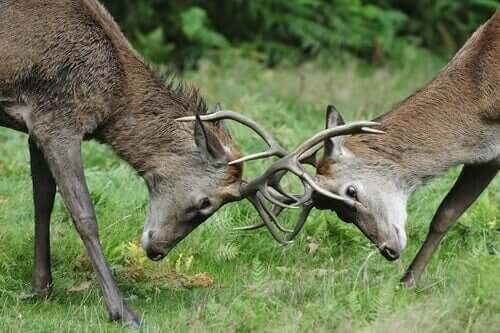 It’s easy for us to imagine two lions fighting for status within a pride, or a hyena and a vulture fighting over a piece of meat. But what do you know about competition between herbivores in the wild?

The concept of “competition” is widely used by biologists when referring to the naturally competitive nature of wild animals. It can occur between different species, as well as between members of the same species.

In Colorado, for example, there are three distinct species of gopher – Geomys, Cratogeomys and Thomomys spp. – which all compete for the same territory.

In Kenya, two species of hare – Lepus capensis and Lepus crawshayi – live side by side near the Great Rift Valley. There are often fires in this region that alter the habitat for both species. This gives L. capensis dominance over L crawshayi, as it moves better on open terrain. However, when the thicket grows back, L. crawshayi achieves dominance once again.

Competition between herbivores: rabbits vs. hares

Before humans interfered, the European hare (Lepus europaeus) had never crossed the Pyrenees. The European rabbit (Oryctolagus cuniculus) lived in the Iberian Peninsula, along with the Iberian hare (Lepus granatensis). But over the years, the European rabbit and hare have begun to overlap, with both spreading throughout most of Europe, South America and Oceania. With the exception of Australia, hares occupy far more territory than rabbits.

Somehow, there is a form of allopatric speciation between these two species. This means that each prefers a certain type of habitat. On the one hand, rabbits prefer sandy and clay soils, coniferous forests and grasslands. The hare, on the other hand, prefers cultivated land, crop fields, dunes and forest clearings.

In rural areas, it’s always been believed that hares and rabbits avoid one another. This may be because, when they outnumber them, rabbits will chase and harass hares until they become too weary. Experts believe that this is one of the reasons rabbits outperform hares in Australia. However, despite the rumors, rabbits and hares can be seen grazing side by side on all other continents.

Why is it that the more rabbits there are, the fewer hares, and vice versa?

The death of thousands of rabbits throughout Europe in the 1950s as a result of the disease myxomatosis tells us a lot about how rabbits and hares interact. It proved that when rabbit numbers fall, hare numbers increase. And that can only happen if both species are in competition with each other.

Conflict between rabbits and hares has always been widely reported, both in captivity and in the wild. There have been many cases of rabbit attacks on hares over the centuries. However, they’ve also been seen sharing territory and eating peacefully side by side.

Studies show that there’s normally no aggressive behavior between the two species. Hares don’t usually flee rabbit attacks. Nor do they avoid territories occupied by rabbits, or rabbits in general. This means that there’s no reason for them to be in direct competition with one another. One species can live in one part of the territory, and the other can simply live elsewhere.

There have been reports of diseases which, while normally unique to rabbits, are fatal in hares, and vice versa. For example, the Graphidium strigosum parasite originally only infected rabbits. However, it was later discovered that when a hare entered a territory occupied by infected rabbits, it would also become infected.

The European rabbit and hare only became sympatric fairly recently. One of the explanations given for their former competitive behavior is that they were in the process of adapting to their new coexistence.

Since their diets are fairly similar, experience tells us that they can live together quite happily, as long as they feed in different areas. However, in the absence of one, the other will take its place.

Are All Species Important for Preserving Biodiversity?
For many years now, conservationists have specially selected and protected certain species in the hope of preserving biodiversity Read more »
Link copied!
Interesting Articles
Birds
Diurnal Birds of Prey, Rulers of the Summits