Characteristics and Behavior of Geese

This migratory bird, capable of traveling about 1,550 miles a day at about 62 mph. They’re robust, easy to train and faithful to their breeder. They’re also very faithful to one another and if another of their kind either gets sick or becomes exhausted, they’ll stay to help and support. 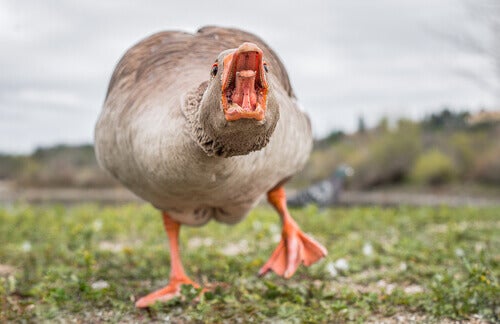 How can we describe the behavior of geese and their characteristics? They’re duck-like waterbirds, but larger in size and weight. Their feet are webbed, which helps them swim in the water. They’ve been around for thousands of years, raised by the Romans and other European cultures, and were considered a sacred animal by the Egyptians 4000 years ago.

Over the years, geese have slowly been integrating with pets and domestic farms. They may also be referred to as gander, but this is mainly males.

Unlike other bird species, thanks to their plumage, geese are highly resistant to diseases and adverse weather conditions. This allows them to be raised outdoors throughout the year and they don’t need a lot of care.

Characteristics and behavior of geese: a loyal companion

One characteristic of geese which isn’t well known today, but that made them very popular in the past, is that they’re very loyal, both with breeders and with other geese.

Strangely enough, geese are as easy to train as dogs and have a great sense of smell. They get used to humans quickly which is very handy. What’s strange is their behavior isn’t great when they meet strangers.

Although, in ancient times, people appreciated this bird’s attributes, nowadays they’re far from domestic. Now they’re raised for meat and eggs. Their livers are particularly popular for pate. Some of their natural predators are foxes, owls, and raccoons.

There are several breeds of geese and all are migratory birds. Some species, such as the Canada goose, can fly at speeds of between 40 and 70 mph.

They spend most of the day searching for food. They can weigh up to 33 pounds and measure 3 feet, the same as the Toulouse goose. This species lays about 50 eggs a year, which can weigh up to 7 ounces.

Although geese are aquatic animals, they spend most of their time flying, and their wings can reach up to six feet. They’re also very fast and maintain an average speed of 30 to 37 mph, or even up to 55mph, if threatened.

They have one of the best senses of direction and can return to their birth nest after a year of leaving it. These birds migrate in groups, forming a perfect ‘V’ in the sky. While traveling, they quack to motivate weary companions; the individuals in the rear replace the front of the formation when feeling tired.

Geese have a greater degree of companionship. When another member of their company falls ill or becomes too exhausted to travel, they often leave the formation, along with others, to go and help, and even stay with it until it gets better.

This bird communicates by using more than 10 different sounds, each according to the different situations.

Characteristics and behavior of geese: a faithful bird

A goose even maintains a faithful ‘romantic’ relationship. They chose a mate at the age of three and keeps them until “death do they part”. When the end comes for either of the two, the bird spends time in solitude, until it seeks another mate.

They typically reproduce annually. Females usually lay five eggs and incubate them for a month. Both parents are involved in looking out for predators and raising their offspring.

Goose chicks can fly by the age of two or three months. Throughout their life as a couple, males are very protective of the female.

Link copied!
Interesting Articles
Birds
How Many Turtle Dove Species Are There?