Understanding the Sounds that Cats Make

Do you ever wonder what goes on inside your cat's mind, or what your pet is trying to tell you? Keep reading to understand the sounds that cats make. 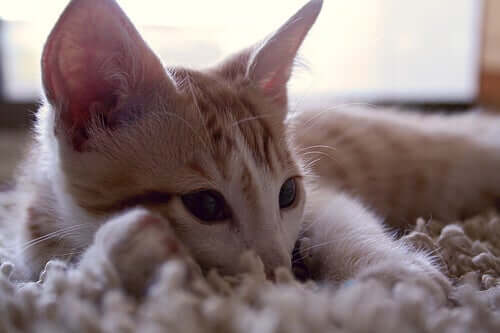 Animals use different means of communication in order to express what they want, need, and feel. But many times we don’t understand them because, of course, they don’t speak our language. That’s why in the following article we’ll try to help you understand the meaning behind the sounds that cats make.

What do the sounds that cats make mean?

In case you didn’t know, cats have more than 100 sounds in their repertoire. It’s their means of expressing their feelings and even opinions. What’s more, they also use body language to communicate. That’s why we should pay attention when they want to tell us something. Some of the main sounds that cats make are the following:

This is the most common sound from cats, and it appears from the time they are born. Meowing is the way that kittens have to let their mothers know that they need attention and food, even though they are born blind and deaf.

It’s very uncommon for an adult cat to meow at another cat. However, it’s common for them to meow at humans. Why? Because humans are responsible for providing their food, water, shelter, and taking care of any other basic needs. In other words, just like their mothers did when they were young.

Among the sounds that cats make, this is one of the most representative. In order to meow, cats open their mouths and then gradually close them to emit different tones. Each meow can last several seconds, and the purpose is to get someone’s attention.

There’s no doubt that, among the sounds that cats make, this is the most beautiful by far. Why? Because cats purr when they’re happy and when they want their owners to pet and snuggle them. However, purring is also something that cats do when they’re sick or hurt in order to soothe themselves.

This little feline motor has healing properties because purring acts like a sort of internal massage. It’s a low rhythmic vibration sound that cats produce without needing to open their mouths. In most cases, it occurs when cats are experiencing a pleasing situation.

This sort of squeaky sound is somewhere between a meow and a purr. One of the main characteristics of this sound is that it lasts less than a second. Also, the sound has an ascending tone, and cats need to open their mouths to produce it. Cats use this sound most often as a means of communication between mothers and kittens. However, adult cats also use it as a sort of friendly greeting towards other cats and even humans.

When an animal wants to defend itself, it opens his mouth all the way and expels air abruptly. This is one of the most interesting sounds that cats make because cats can use it as a means of defense from the time they are 3 weeks old. The expulsion of air lasts less than a second, and the sound is similar to spitting.

When your pet makes this sound, it’s because they are truly angry. Growling is a warning sign towards another animal or person. It’s as if a cat’s trying to say, “Get out of my way before I use my claws.” The sound can be short or long, but either way, it’s a threat.

Both male and female cats can produce sexual sounds. As for males, they use it to “detect” a female cat in heat and to warn others of their presence. When it comes to female cats, the sounds they make are for attracting a partner. In both cases, it sounds like a prolonged and intense groan. Most often, you’ll hear this noise during the night.

Have you ever seen your cat in the window with his ears up and his eyes fixed on a bird or squirrel? If so, then you’ll definitely have also noticed a sort of vibrating sound similar to purring. However, in this case, the sound doesn’t represent happiness, but rather frustration.

You could say that, after growling, if the situation doesn’t change, the next sound to follow will be yowling. This is a sort of war cry that comes when cats are about to fight, especially males. These sounds that cats make are like long howls that are very loud and high-pitched.

Lastly, this is one of the most beautiful sounds that cats make. That’s because they use it to express gratitude for food or attention. It’s sort of a mix between a meow, a purr, and a growl.

Learn About 6 Strange Cat Behaviors And Why They Do It
Cats have always seemed like mysterious beings to us. Let's take a look at strange cat behavior and explain why your cat might be behaving oddly.  Read more »
Link copied!
Interesting Articles
Cats
What's the Best Food for Shorthair Cats?