Learn How Cats Can Heal Themselves By Purring

Purring is one of the ways you can tell if your cat is feeling good or is enjoying being petted. However, there are other reasons for these sounds, some of them may surprise you! 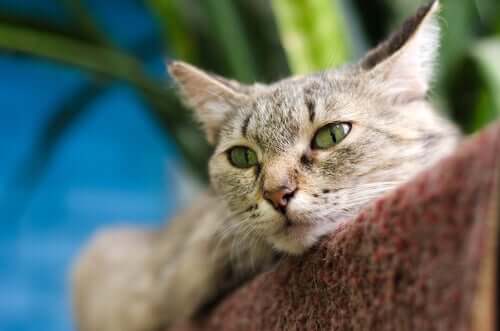 Cats communicate with humans and each other by meowing, growling, snorting and by purring. In addition, different studies also associate many additional benefits to these sounds that they make.

Cases where cats communicate by purring

When can we see a cat purring? Among other cases, in times of stress and fear. For example, when they see the vet or are recovering from an injury. Purring is also used when females take care of their kittens. Cats usually purr when humans interact with them as well, especially when we pet or feed them.

The kinds of intermittent signals that can be associated with purring are produced by cats and other felines. When emitting these sounds, they use the laryngeal muscles and the diaphragm, both when inhaling and exhaling.

Some other kinds of felines emit sounds that are very similar to a domestic cat’s purr.

Just like humans, cats also use communicative functions. In their case, purring is one of these functions. In addition, the frequencies emitted by felines when purring are similar to those produced in some human treatments. These include pain relief treatments, for coughing or breathing problems and so on.

There are many legends that tell how cats can heal themselves when they have broken bones in their bodies. All they need is for us to leave them in a quiet room, according to the legends. Can this be related to the case of purring?

Consider that felines can save up a lot of energy. Among other things, this is because they spend several days being inactive. However, this is only part of their instinct, given the difficulty of catching prey to feed on.

Because of all of this, these peculiar sounds cats make are very beneficial for their health. It can increase their bone density and accelerate the rate of healing processes. In addition, it even helps them get to sleep.

Different studies carried out with cats have been demonstrating the effectiveness of the purring “technique”. Experts believe, as a result of this research, that felines cure themselves “before” they even get any health issues. An example of this is breathing problems, as purring has been shown to help prevent them.

An explanation for this specific assumption on breathing difficulties is that purring allows them to breathe through the mouth. This is something that can be difficult for them to do if they have a damaged nose.

How do cats purr?

This sound is produced with the vena cava blood flow, which takes place when circulating through a voluntary constriction that the cat produces in the transit between the liver and the diaphragm.

In some neurovegetative states, the blood forms waves as it circulates through this bottleneck causing vibrations that expand throughout the body and the cranial sinus cavities through the trachea. This produces vibrations that have the ability to relax their whole body and control their feelings.

Cats create vibrations, above all, to increase their comfort. They’re great specialists in getting rid of negative energies. They’re also able to perceive and identify their owners’ emotional states. That’s why it’s said that having a cat in our home clears up any bad or negative energies that may be stuck somewhere.

“Puchi” the dog had been attacked by a much larger dog and had serious peritonitis, and a fissure in her rear limb. She also had bruises and injuries throughout her body.

After her first emergency operation, there wasn’t much hope for her. When she arrived home, the dog was bedridden, cold and without any appetite at all, seemingly on the verge of death. However, there was a cat at home that came over to Puchi. She sat next to her, and purred for hours on end.

Puchi began to recover day by day. Her owners even placed a small speaker playing a recorded track of the cat’s purring sounds in the house. They observed how the dog would crawl across the carpet to get near the speaker. Puchi would stretch completely on top of it to absorb the vibratory field with her body and increase her healing. Isn’t that amazing?

As we can see, nature surprises us once again and shows us alternative ways for healing!