Meet the Most Amazing Species of Eagle

Up next, we present you with a list of the most noteworthy species of eagle. You'll be surprised to know some of these can measure up to 3.5 feet tall and have a wingspan of almost 9 feet wide. 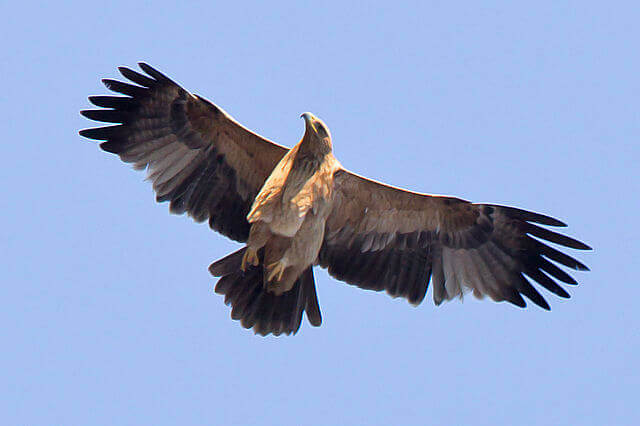 Eagles are elegant, majestic animals that live in mountainous areas. In addition, they also have really powerful beaks and claws. It’s safe to say these are some of the most impressive birds out there. Did you know that there are many different species of eagle inhabiting our planet? In this article, we’ll cover some of the most impressive ones and we’re sure you’ll love them.

The most beautiful species of eagle

The eagle is the largest predatory bird in the animal world and its different species live all over the planet. They are characterized by their large size, strong beaks, well-developed claws, and robust constitution.

The relationship between eagles and men dates back thousands of years, as they have been used as a symbol in wars, countries, empires and even in sports teams. They’ve also played an important role in practices such as falconry, the art of hunting animals in their natural state using eagles.

For many, eagles are animals that represent power, majesty, and victory. It’s evident how this symbolism is present on family crests and flags, such as Mexico or Albania’s national flags.

Here’s a shortlist of some of the most impressive species of eagles in the world:

It’s arguably one of the most famous birds of prey in the northern hemisphere, especially Eurasia and the United States. Its flying speeds are astonishing and if we add this to the power of its claws, it’s obvious why it fascinates so many of us. These two components allow this majestic bird to catch its prey in mid-flight.

The golden eagle’s diet is mainly composed of rabbits, rodents, squirrels, reptiles and live fish. However, they can also eat carrion that has been abandoned by other animals. It’s dark brown, has broad wings and its beak is dark at the tip. In addition, it should be noted that males are smaller than females.

This eagle is native to the Iberian Peninsula and is, unfortunately, an endangered species. It inhabits mountainous areas as well as dunes and marshes near the coasts. In addition, each eagle couple has its own territory that can be as large as 2,000 hectares. This territory is usually divided into three zones: nesting, nearby food, and distant food. Its diet includes rabbits, hares, crows, rodents and small birds.

The Spanish imperial eagle is a monogamous animal, as it mates for life. The eagle couple will rearrange their nest between March and July every year. Moreover, the female can lay up to five eggs and incubates them for around 43 days. This task is usually alternated with the male eagle. However, when food is scarce, they cover the eggs with branches and leaves so that both can go out and search for food.

The bald eagle is the national bird of the United States, and is prominent in seals and logos, coinage, etc. It’s used for many items related to the U.S Federal Government.

It’s a symbol of freedom and strength, and some native American tribes even regard it as a “messenger of the gods”. Despite their name, they’re actually not ‘bald’ as they do have feathers on their heads. However, these feathers are white in color, which contrasts with their brown bodies.

As with most birds of prey, females are 25% larger than the males and both genders reach adulthood at around four or five years old. Bald eagle courtship includes elaborate, spectacular calls and flight displays. Once the breeding stage begins, the female will lay 3 eggs on average. Both the father and mother take turns for nesting and looking for food which consists of lizards, snakes and some small mammals.

Its habitat is the open places of sub-Saharan Africa and it’s a truly enormous bird. The martial eagle can measure up to 38 inches long. However, its wingspan during mid-flight can reach almost 6.5 feet long.

The adult’s plumage is dark grey with considerable light-colored edges. In addition to this well-admired ‘design’ that looks outstanding during flight, its powerful range vision allows it to spot its prey from afar.

As for its diet, we can say that this is a super-predator that feeds on various animals. The list includes small birds, cobras, mambas, pythons, hares, squirrels, baboons and young mammals such as impalas, antelopes, and foxes.

This eagle breeds in southeastern Europe but also throughout West and Central Asia. However, the Eastern Imperial eagle also migrates to Africa during the winter. In addition, it’s used as an emblem of the royal house of the Habsburgs in Austria.

It’s slightly smaller than the golden eagle but is of equally considerable size: 27 to 35 inches long with a typical wingspan of 5’9″ to 7’1″. Moreover, its plumage is brown except for the shoulders and the tip of the tail, it mates for life and females lay 2 eggs per year which they incubate for 43 days.

The crested eagle is a large Neotropical eagle that’s native throughout South America but found practically only in the Amazonian river basin. Crested eagles have long wingspans (55–70 in), a large head, and bare legs.

The crested eagle has a big head, enhanced by the extended feather crest that inspires its name. This species of eagle feeds largely on arboreal mammals and birds. It often sits in the canopy, but is more likely to soar over the canopy than the Harpy. The head, back, and chest of most adults are brownish-gray, with a white throat and a dark spot on the crest.

We hope you enjoyed learning about these fantastic species, as they truly are majestic. Until next time!