All You Ever Wanted to Know about the Falcon

In today's article, we'll tell you all about the falcon, a bird of prey with a very well-developed eyesight. It can also reach great speeds when it flies. 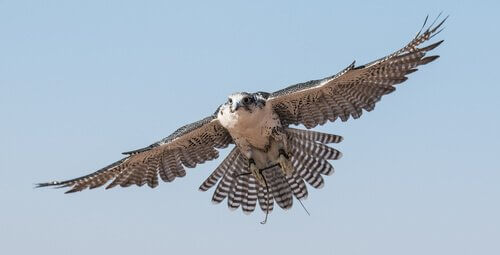 Today, we’ll tell you about the falcon, a bird of prey which is part of the family of Falconidae – a bird which is known for its infallible vision. Its vision allows it to detect prey even at great distances. Because of this, the falcon is an effective and fast hunter.

Some details about the falcon

There are more than 40 species of falcon, and it varies in size and color. This animal lives all over the planet, except for Antarctica.

Among the falcon’s physical characteristics, we can point out the following:

Learn about the falcon, a bird of prey with highly developed vision, known for being an accurate and fast hunter.

Like we’ve already mentioned, this bird has amazing eyesight; on average, it’s two and half times better than that of humans. Because of that, it can detect his prey at great distances.

In the novel The Last of the Mohicans, author James Fenimore Cooper named the protagonist Hawkeye, after the falcon. That’s because, even from far away, he could always hit the target with his rifle.

An accurate and fast hunter

Once the falcon detects its prey from the air, it will launch towards it at great speed and enviable precision. While different species of falcons have different hunting methods, the most common one is to fly and dive.

Under these circumstances, some species are particularly fast and fly over 124 mph. However, the peregrine falcon exceeds 186 mph and is considered the fastest animal in the animal kingdom.

It mainly feeds on small animals. For example:

Falcons have diurnal habits and are generally solitary animals; they only stay together when it’s time to reproduce. They build their nests in high places, either in mountains, on cliffs, or at the tops of tall trees. This is how they protect their young from predators.

The falcon reaches sexual maturity at the age of one year. The female usually lays about three eggs and will take care of her young for about 90 days, at which time the young must fend for themselves.

They have a life expectancy of 15 years in the wild, and can live up to two decades in captivity. In captivity, they are mostly used for falconry.

And, of course, man is one of its main predators, as well as wolves. Additionally, eagles and owls can hunt small species of hawks or very young ones.

Meet the Kiwi, A Flightless Bird
Today you can learn about the kiwi, a flightless bird that has feathers that look like hair. Read this article to find out more about this amazing animal. Read more »
Link copied!
Interesting Articles
Birds
Discover 5 Different Types of Owls