Meet the Bird that Sleeps Flying

It not only spends its flight time sleeping, but it also feeds and even reproduces in the air. According to theory, this is how they avoid their predators. 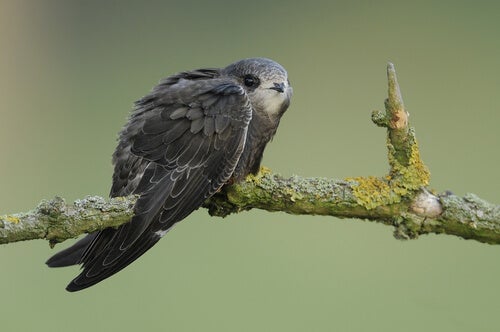 Once spring hits, it’s common to find some birds on the ground. One of the birds that can benefit the most from humans helping them is the bird that sleeps while it flies: the beloved Swift bird (Apus apus).

A bird that sleeps flying?

That’s right. And, even if it sounds poetic, the swift can spend at least ten months flying non-spot. Ronald Lockley, an ornithologist that has already passed away, came up with this hypothesis: the Swift spends most of its life in the air and only stops to breed.

This hypothesis has been tested recently thanks to research in which a tiny GPS was placed on the bodies of 13 of these birds. Using the GPS, the researchers could track their acceleration, location and flying pattern.

How do they do it?

Many still wonder how it’s possible that a bird can sleep while it’s flying. The truth is that there are several birds that have this incredible ability.

One of them is the frigate, a bird that has a two-meter-long wing-span and has an ultra-light skeleton, which allows it to soar for hours.

It’s during these flights that the frigate sleeps for periods of five seconds. This allows the bird to sleep for about three-quarters of an hour a day. It’s believed that other birds, like the swift, could use this system that allows them to sleep lightly so it wakes up to any changes in the wind pattern.

Others theorize that swifts fly above the clouds to avoid predators and to sleep, which would drastically reduce their flapping.

The truth is they do whatever they do, and it’s been shown that they can go almost a year without stopping, which means these birds have to find some way to sleep.

A bird to remember

The swift, the bird that sleeps flying, has many behaviors besides its particular way of sleeping. They are migratory birds that spend the winter below the Sahara, and breed during the spring in Europe.

Like other birds, they’re an example of monogamy in the animal kingdom, so they spend their entire lives with the same partner.

They also have an excellent sense of direction. In one experiment, Swiss swifts were moved to Lisbon, and at least half of them managed to return to their place of origin. It’s also one of the fastest birds in the world that can reach speeds exceeding 100 km/h.

It isn’t just the bird that sleeps flying

The truth is that the swift isn’t just a bird that sleeps flying, because it performs other behaviors in full flight. This bird feeds, maintains its nest, drinks from lakes and even reproduces without touching the ground.

If you ever come across a swift on the ground, then you should help it. Its huge wings aren’t made for taking off from the ground. They may collide, making it impossible to get back into the air.

To help a disoriented swift, you should place it on a ledge or throw it carefully into the air on if the ground is cushioned enough to protect it from falling down. If the bird can’t fly, you should take it to a rescue center.

In regard to how the swift feeds, when it’s flying, it opens its mouth to catch insects. So, it’s capable of hunting thousands of invertebrates every day, especially when it has to feed its young.