The Shoebill: Behavior and Habitat

The shoebill, also known as whalehead, is an incredible bird of prehistoric appearance. It's endemic to the African continent. 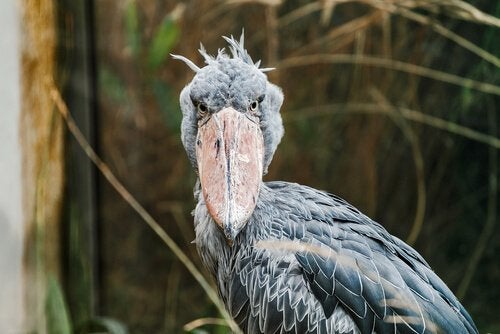 The shoebill is a very curious bird, a native of Africa. A National Geographic documentary described it as a bird with a stork’s legs, a pelican’s beak, and an eagle’s head. It seems like a good description. A shoebill looks like one of the fantasy creatures found in the drawings of a child.

A unique bird, scientists have named it “whalehead,” or Balaeniceps rex. It has a sort of prehistoric aspect and has been classified as vulnerable and placed on the endangered species list. Unfortunately, there are not many shoebills left, and they continue to decrease at a steady rate.

Since its discovery in the 19th century, the shoebill has generated much interest in the scientific community. They’re very large birds –although the females are always smaller than the males.

The shoebill male grows up to 5 ft tall, and the span of its wings ranges from 7.5 to 8.5 ft. The females, on the other hand, measure about 7 inches less than the average male.

Surprisingly, this bird can live up to the age of 50, which makes it one of the longest living wild birds. Due to their slow development, these birds only reach sexual maturity after their fourth year of age.

The plumage of a shoebill is bluish gray and ash with a greenish tone on its back. On the other hand, the belly and tail feathers are almost white; their eyes are yellow, and their legs black.

Behavior of the shoebill

The behavior of this bird is interesting. Shoebills are solitary birds with sedentary tendencies. They don’t like to be bothered and, in general, they’re not close to other birds –not even those of their own species. Except during mating season, that is. Still, even during mating, there are usually no more than two nests per square mile.

Once this fascinating bird finds a place that seems pleasant and where it can find a steady supply of food, it’ll stay there for a long time. They build nests in spite of being large birds. A shoebill’s nests are usually made of fallen grass canes.

Shoebills feed on fish mainly. They prefer leopard lung, Senegal Bichir, catfish and tilapia. Fish are not their only food, however. A shoebill also feeds on amphibians, young crocodiles, rodents, water snakes and, very rarely, other waterfowl.

Unfortunately for tourists, these birds are mainly nocturnal. They usually remain hidden during the day to avoid predators and go out at night to find food. It’s for this reason that tourists don’t usually see them in action.

During the mating season, the shoebill form monogamous pairs. The parents-to-be lay the eggs in nests of trampled vegetation that can be as big as 10 to 14 ft wide. Each shoebill pair can lay two to three eggs, but only one egg will produce a surviving newborn.

A shoebill will grow at least 3 ft long only two months after being born. But their parents will continue to look after them. In addition to that, they won’t allow them to venture out of the nest without supervision until the young ones are about five months old.

The habitat of the shoebill

The shoebill inhabits the east and tropical zone of Africa mainly. The highest concentrations are in the stretch from Sudan to Zambia. During the mating and breeding period, it often nests in the marshy areas of seasonal flooding in areas like Tanzania and Uganda.

The rest of the year, the habitat of shoebill are low waters and scant vegetation. Due to their size, these birds prefer to stay in areas with good visibility in order to remain vigilant.

Low-oxygen waters are ideal for the shoebill as fish must swim closer to the surface, making them easy prey for this bird. In areas like Sudan, the shoebill also feeds on rice and other grains and grasses.

Threats to the shoebill

The destruction of its habitat is one of the most significant threats to this species of bird. Unfortunately, the best places for crops are also its favorite places to nest and breed.

When its breeding area is affected, this bird forms fewer pairs and lays fewer eggs. Because of this, their population seems to be decreasing rapidly.

Also, this species is one of the victims of poaching. Illegal traders steal shoebill eggs and sell them to the highest bidders. Only a few countries have hunting laws that protect shoebill.

In Tanzania, one of the places where hunting this bird is legal, it’s sought after for food.

There are however several international bills that seek to protect the shoebill. There are also breeding-in-captivity projects to try to increase the population of these birds. We trust that in the upcoming years the shoebill will be protected so it can roam free again.

How to Identify a Bird’s Gender
Identifying a bird's gender can be complicated. Even vets with the most expert of eyes may not be sure how to identify a bird's gender at times. Read more »
Link copied!
Interesting Articles
Birds
The Bali Myna: A Beautiful Critically Endangered Bird