This wild mammals mainly come from Australia, although they can also be found in the Americas. Their main feature is that the females have a 'pouch' where the embryos finish their development. 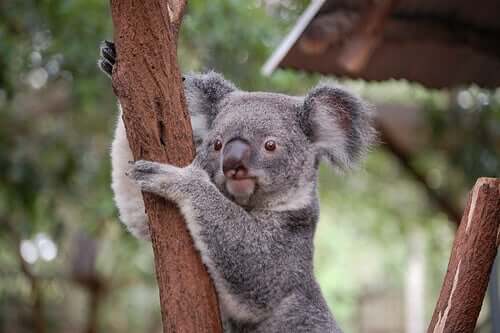 In this article, we’ll tell you all about some different types of marsupials, which mainly come from Australia but can also be found in the Americas.

To complete their growth, they ‘attach’ themselves to a teat on the outside of the mother’s body. This ‘pouch’, which is known as the marsupium, is attached to the body by some special bones which aren’t found in other animals.

Another difference with regard to their bone structure is the size of their cranium, which is quite small in relation to their body.

Marsupials are a very heterogeneous group made up of moles, kangaroos, marmots, and rats. As a result, there are many different sizes, and they feed on different things – plants, animals, insects, or fruit.

Of the 270 different species within this group of mammals, 200 live in Australia and the rest are found in the Americas. There are no indigenous species on the other continents. Here are some examples:

This is the most well-known marsupial, and it’s famous for the way it moves by jumping. It’s also recognizable for carrying their baby around in their pouch.

One of the most popular kangaroos is the eastern grey kangaroo. This variety lives on grasslands and forests in eastern Australia and eats grass and pasture. They’re very similar to the red kangaroo (with different color fur), which can reach up to two meters tall and weigh 145 pounds.

This nocturnal marsupial is the only one that lives in North America, specifically north of the River Bravo. It’s about the size of a domestic cat, solitary, and an excellent opportunist. When they sense danger, they give off a strong smell and throw themselves to the ground as if they were dead.

This species is quite common in northern Australia and is not in danger of extinction. They’re quite similar to the kangaroo but smaller. Their gestation period lasts 38 days and then the mother carries the baby for nine months in her pouch. The Australian rugby team is nicknamed ‘the Wallabies’.

These are only found in Australia. The koala is a slow-moving, peaceful animal with a very distinctive appearance: small body, large head (rare among marsupials), round, hairy ears, and a large black nose.

They mainly feed on eucalyptus leaves and, because this doesn’t provide them with many nutrients, they lead quite a sedentary life. In fact, they’re almost always sleeping among the branches of the trees. Although they might look like a teddy bear, they don’t belong to the bear family.

Distributed throughout South America, the white-eared opossum can adapt to any habitat, including urban areas, and lives for up to four years. Males are larger than females, and both sexes have a long tail that is almost the same length as their body.

They breed up to three times a year and the internal gestation period lasts 14 days. After that time, they give birth to babies which are just half an inch long. They then “attach” themselves to the mother’s teats and remain there for six weeks. After that, they then climb on the mother’s back and only move to feed on breast milk for the next six months.

Finally, this is one of the few carnivorous marsupials that still live on the planet. As their name implies, they come from the island of Tasmania, and they’re about the size of a small dog. Their body is covered in black fur, and it has striking reddish-colored ears.

As for their behavior, they’re known to scream very loudly, and they’re fierce when eating. They can hunt, but they also feed on carrion and are usually quite solitary. The young remain attached to their mother’s pouch for 100 days, at which point they reach 7 ounces in weight and are expelled from the home.

10 Species at Risk of Extinction
Sadly, mankind's actions mean that hundreds of species are at risk of extinction. Today, we want to take a closer look at 10 of the most endangered species. Read more »
Link copied!
Interesting Articles
Mammals
The Puma Is The Great American Predator