Why Elephants Are Social Animals

Many animal species decide to live as groups, believing that it gives them the best chance of survival. This trait is usually a sign of intelligence. 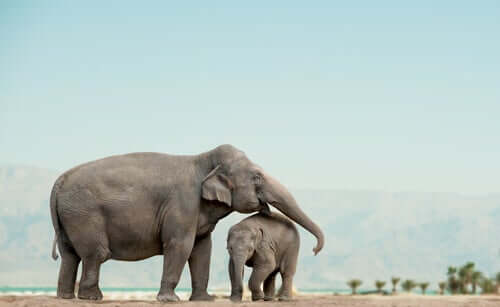 Elephants are social animals, which means they spend a great deal of their time interacting with other members of their group. This is because they’re highly intelligent creatures, and are capable of developing a clearly distinguishable social structure within the herd.

The intelligence of elephants

In animal psychology, intelligence is the ability to solve problems. These problem-solving skills are often present in animals that live in varied environments, as it shows that they’ve been able to overcome threats to their survival.

Why are elephants considered intelligent?

We all know that elephants have a long lifespan. They travel huge distances in their lifetime and are born with highly developed central nervous systems. These are all traits that are usually associated with the ability to solve problems. Other important factors to consider are:

All these aspects have to be taken into account when dealing with elephants. As intelligent beings, they’re able to find solutions to all kinds of dangerous situations.

Female elephants live in family groups. These groups aren’t usually all that large, and are led by a matriarch, which is usually the oldest elephant in the herd.

Within the family nucleus, young, unpaired females act as babysitters, helping baby elephants learn and develop. However, if there’s one member of the herd that has the greatest impact on learning, it’s the matriarch. As she is the oldest female, the other elephants copy her behavior, and pass these skills on to their young.

Because they tend to stay in the same group for their entire lives, elephants form very strong bonds. Within female groups, aspects such as age, size, and parentage impact the social status of each member.

Normally, the matriarch serves as the group’s memory, helping to ensure their survival.

Calves born to dominant females tend to have a greater chance of survival. This seems to be because more dominant members are given first pick when it comes to food, improving the quality of their milk.

What about male elephants?

Male elephants leave their family groups during adolescence. Normally these young males form their own groups, where they constantly battle to improve their social status.

When the males reach 18-20 years of age, they’re physically larger than the females, and become ideal mates.

At this point, males enter a state known as musth. During this period, they exhibit highly aggressive behavior, combined with increased levels of reproductive hormones. This typically occurs during the wet season.

Males in musth are dominant and more likely to mate with females. Other characteristics which influence dominance among males include size and age.

Curious Facts About Elephants
The elephant appears gentle and doesn't scare us in the slightest. Would you like to know some curious facts about elephants? Read more »
Link copied!
Interesting Articles
Wild Animals
5 Animals that Live in Grasslands