The Extinct Megafauna of Australia

Two million years ago, majestic beings lived in what is now Australia. Read on to discover the megafauna that became extinct there. 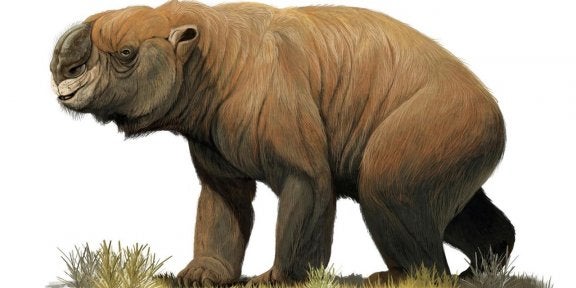 In 1969, Rod Wells, a fossil-searching fanatic, entered Victoria Cave in southern Australia. He could never have imagined that deep inside lay fossils of some of the largest animals to roam the earth. Welcome to the megafauna of Australia.

This article will show you some of the most fascinating, enormous animals that lived in Australia during the Pleistocene era.

Megafauna of Australia: the Diprotodon

The diprotodon, shown in the photo at the top of this article, is the most gigantic marsupial to have ever lived, as far as we know. It was a herbivore with the approximate size of a rhinoceros.

According to scientists, these animals populated the island of Australia 1.6 million years ago. They seem to have lived in herds, and used to inhabit wooded areas and pastures, always near lakes or rivers. There they fed on leaves, grass, and some shrubs.

However, its large size and lack of agility played against it. This made it easy prey to another member of the megafauna of Australia– none other than the marsupial lion.

The marsupial lion, a natural hunter

This ruthless predator weighed between 220 and 350 pounds, and was the size of a leopard. No doubt this made him the largest carnivorous mammal in the area.

The Marsupial lion (Thylacoleo carnifex) was able to stalk and kill animals much larger than itself. Its strong, sharp claws helped it keep its prey captive.

One strange fact about this member of the megafauna of Australia is its origin. The marsupial lion’s ancestors were herbivores. Therefore, its teeth were adapted for that purpose. To solve this problem, the marsupial lion made up for the absence of canine teeth with its sharp incisors.

In addition, it developed knife-shaped premolars. These, along with the biting power of their jaws, had a devastating effect. For example, researchers believe that all these fearsome tools allowed the marsupial lion to kill its prey in just one minute.

Once again, here is one of the most impressive specimens of the megafauna. The short-faced giant kangaroo (Procoptodon goliah) was very similar physically to present-day kangaroos. However, its face was flatter and its eyes faced forward.

With a height of more than two meters, and weighing up to 500 pounds, these marsupials could reach the leaves of the trees and eat them. Their arms had long, claw like fingers that allowed them to reach the farthest branches.

Despite being very similar to current kangaroos, there is scientific evidence that these animals didn’t move by jumping. Their anatomy is similar to biped walkers, like humans.

They were one of the last members of the megafauna. They became extinct about 50,000 years ago.

Why did they become extinct?

Exactly what happened to the Australian megafauna remains unclear to this day. Many studies point to climate change as the main cause.

Researchers like Tim Flannery blame it on the arrival of man on the Australian continent 50,000 years ago. Hunting and deforestation might have contributed to their disappearance as well. Nevertheless, this theory is controversial.

Whatever the cause of their extinction, it’s clear that amazing animals existed millions of years ago. Thankfully, modern paleontology and research have prevented these creatures from being forgotten.

Extinct Whales Discovered Off The Coast Of Spain
Extinct whales are being discovered all over the world. Although they've now disappeared from our coasts they once lived there hundreds of years ago. Read more »
Link copied!
Interesting Articles
Birds
The Effects of Climate Change and Plastic Pollution on Seabirds